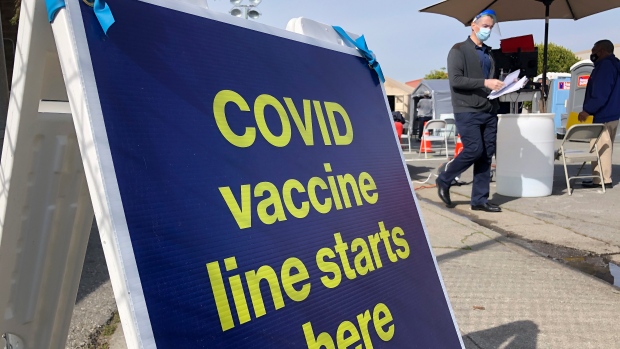 TORONTO — The Ontario government has announced updates to its COVID-19 vaccination plan, saying all teachers in high-risk neighbourhoods will soon be able to get their shot.

Premier Doug Ford shared the update during a news conference on Wednesday, where he announced that the province would be under a stay-at-home order starting Thursday.

Starting April 12, the premier said education workers across the province who provide daily support to students with special education needs would now be eligible for the COVID-19 vaccine.

In addition, all education workers in high-risk neighbourhoods in Toronto and Peel Region will be able to get their vaccine.

“As vaccine supply allows, eligibility will expand to high risk neighbourhoods in other hot spot regions, including York, Ottawa, Hamilton, Halton and Durham,” the province said in a statement released Wednesday.

The news comes as teachers’ unions and advocates called on the province to expand vaccine eligibility to education workers as the province chooses to keep schools open amid surging disease case numbers.

Toronto and Peel Region schools are currently closed until at least April 18 after the local medical officers of health in both regions used their powers under the Health Promotion and Protection Act this week to suspend in-person learning.

The province also added that people living in regions with the highest transmission rates of the disease would be prioritized to receive a vaccine, starting in the most at-risk areas in Peel and Toronto.

It’s not yet clear what priority neighbourhoods will be included in the list, but the government said its targeting regions based on “established patterns of transmission, severe illness, and mortality.”

People over the age of 18 in these groupings will be eligible.

Officials said the province would also expand booking for COVID-19 vaccine appointments to people aged 50 and over in high-risk neighbourhoods starting Friday.

“Booking eligibility will be extended to include individuals aged 50 and over for COVID-19 vaccination appointments at mass immunization clinics in high-risk areas as identified by postal code, using the provincial booking system,” the province said.