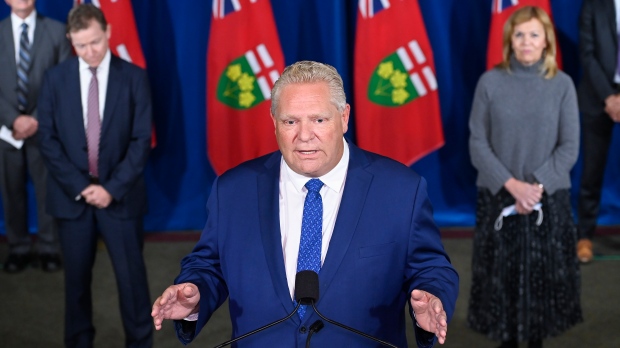 TORONTO — The stay-at-home order for Toronto, Peel Region and North Bay-Parry Sound has been officially extended until March 8.

The Ontario government made the announcement on Friday afternoon saying that the decision was made based on key public health trends in the four regions.

York Region is the only COVID-19 hot spot lifting the stay-at-home order and will move to the red zone of the province’s colour-coded reopening framework on Feb. 22.

“During this same period of time, North Bay Parry Sound District has also seen its case rate increase by 11.5 per cent to 14.6 cases per 100,000 people. Variants of concern also remain a serious risk to community transmission and health system capacity.”

The government also said Lambton Public Health will move from the orange zone to the red zone “as a result worsening public health trends in the region over the past week.”

These changes will come into effect on Feb. 22.

Most of the province has already transitioned into the government’s colour-coded reopening framework, which governs what restrictions are in place in each region depending on the current COVID-19 situation.

Even in the strictest level of the province’s reopening framework, some businesses would be allowed to reopen with capacity limits.

Earlier this week, health officials in both Toronto and Peel Region called on the province for current lockdown measures to be extended for at least two weeks. The decision, officials said, would allow for more time to ensure schools are reopening safely and to learn more about the super-contagious variants of COVID-19 spreading across the province.

“I have never been as worried about the future as I am today,” Toronto’s Medical Officer of Health Dr. Eileen de Villa said Wednesday while warning new infections could surge if the city reopens too quickly.

“By the time the confirmed case counts are big enough to shock us it will be too late to do anything, we will be in a third wave as bad as anything we have been through thus far,” de Villa said.

York Region’s medical officer of health urged the premier to put his region in the red or “control” category of the framework, which allows in-person dining to resume at restaurants and bars, and gyms to reopen with reduced capacity.

The decision comes as new national COVID-19 modelling, released by federal health officials on Friday, predicted that with variants continuing to spread across Canada even the current level of public health measures will not be enough to prevent a resurgence of the virus nationwide.

The long-range modelling predicts a “strong resurgence” of COVID-19 in March and April in all provinces.

Ontario confirmed 1,150 new cases of the novel coronavirus on Friday, after 1,038 infections were reported on Thursday.

This is a developing news story. More information to come.