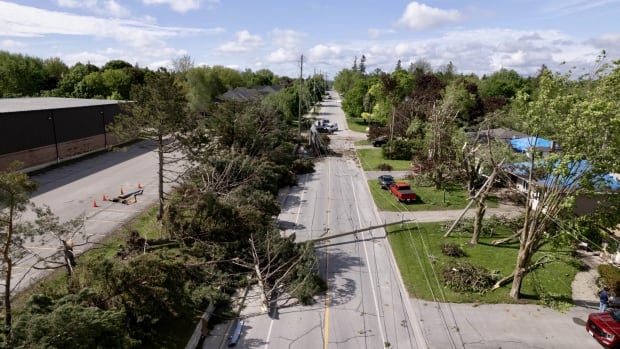 Several schools in Durham Region and Toronto will be closed to students and staff on Tuesday with no access to power after a storm tore through Ontario over the long holiday weekend leaving many in the dark for several days.

The Town of Uxbridge, east of Toronto, has declared a local state of emergency due to storm damage, with some buildings reduced to rubble and streets blocked by uprooted trees, downed power lines and broken telephone poles.

There will be no virtual learning for students at those schools as many students may still be without power, the school board said.

“The decision to close these schools has been made to protect the health and safety of students, parents/guardians and staff as electricity is needed to safely operate a school,” the board said in a statement issued on Monday.

The school board says it anticipates to reopen all schools on Wednesday.

“School custodians and DDSB service providers will be clearing downed trees, broken branches and debris in schoolyards. There may be some modifications to recess and lunch time based on this impact,” the DDSB noted.

The Toronto District School Board said A.Y. Jackson Secondary School will also be closed Tuesday due to power outages. Students will be expected to participate in asynchronous learning for the day.

Saturday’s storm generated winds of up to 132 km/h, knocking down power lines and downing trees. At least 10 people  across Ontario have died as a result of the powerful storm.

Our crews and utility partners continue to get the lights back on for the 196,000 customers without power. It’s been a difficult couple of days with widespread damage and outages, and we’re doing everything we can to rebuild the grid as safely and efficiently as possible <a href=”https://twitter.com/hashtag/ONstorm?src=hash&amp;ref_src=twsrc%5Etfw”>#ONstorm</a> <a href=”https://t.co/wJmJsbCbY6″>pic.twitter.com/wJmJsbCbY6</a>

While Environment Canada sent out an alert warning people of the storm, the fast-moving system caught many off-guard.

The storm knocked out hydro service for 500,000 people and more than 150,000 are still without power as of Tuesday morning, according to a Hydro One spokesperson.