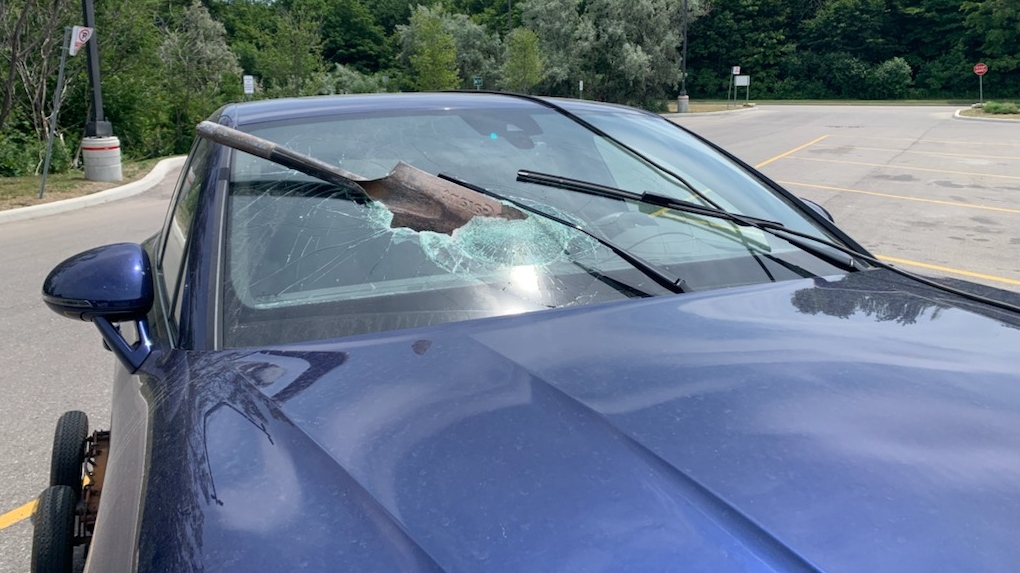 It started as a routine drive for Komal Syed.

“I went on the 403 from Winston Churchill”, the Mississauga resident told CTV News Toronto. “I just had two…exits to take.”

It was just before 11 a.m. on Monday and Syed was headed to an appointment. She says she noticed a white sedan pull into the lane in front of her, causing her to reduce her speed. It was then she noticed something was odd about the car.

“It’s bumper started moving. And I was like, okay it seems like it’s bumper is coming off. And next thing I hear – a crash.”

That crash was caused not by a bumper, but by a shovel flying through her windshield just centimeters from her face.

“I honestly don’t know where the shovel came from,” Syed said. “From what I recall, the bumper was moving. The bumper seemed to be coming off, but it wasn’t. Eventually what was in my car was a shovel.”

Syed says in the moment she managed to remain relatively calm.

“I turned and saw this shovel in my windscreen and I realized that, okay this is pretty big,” she said with a slight chuckle. “I mean I obviously screamed and I must have panicked, but I didn’t swerve luckily.”

Syed pulled to the side of the road and surveyed the damage. A cell phone video she took at the time shows the extent of the damage. She said she didn’t even realize that she was covered in broken glass until a tow truck driver who had stopped to help pointed it out.

While she recounts the story with a nervous laugh now, she says she didn’t realize until much later just how different the incident could have been if they shovel had hit the windshield in a different place.

“The next day when I shared it, and I was repeating what happened, that’s when it hit me that it could have been anywhere.”

Syed says she drove the same route the next morning in order to dissuade any fears she might have about safety. And says she has a message for other highway drivers in the hopes that others won’t have to go through what she has.

“If someone is going to go on the highway with tools or equipment, please make sure it’s secured properly. Because this is just like.. so scary.”