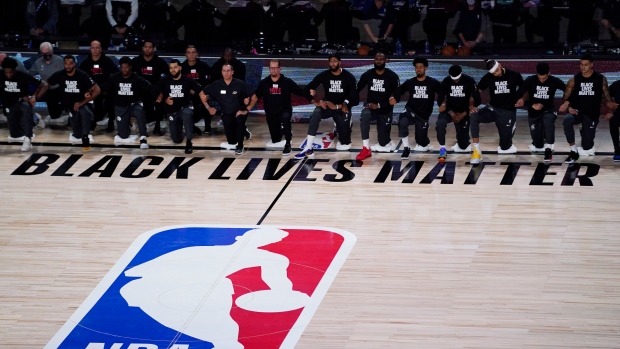 LAKE BUENA VISTA, FLA. — The Toronto Raptors kneeled for both the Canadian and American national anthems ahead of their first real game in nearly five months Saturday.

Linking arms in a line behind the words “Black Lives Matter” on the court, the Raptors and Los Angeles Lakers kneeled for The Star-Spangled Banner.

The Raptors changed knees for “O Canada,” a powerful message of unison.

Toronto faced the Lakers in their first of eight seeding games as the NBA resumed after the COVID-19 lockdown.

Raptors coach Nick Nurse had said the previous day that his team would treat the two anthems as “one long song,” noting that Canada has issues with police brutality it needs to work on also.

Tipping off weeks after the killing of George Floyd sparked an American uprising — numerous NBA players marched in protests in the days that followed — the NBA vowed that the return of basketball wouldn’t be a distraction from racial and social justice issues.

They’re front and centre at the NBA’s restart. The words “Black Lives Matter” are written in big block letters across the three courts being used at Walt Disney World. Both teams warmed up Saturday wearing black shirts bearing the same message.

The players have been permitted to substitute their name on the backs of their jerseys with racial and social justice messages, picking from a couple dozen drawn up by the league.

This report by The Canadian Press was first published on August 1, 2020.