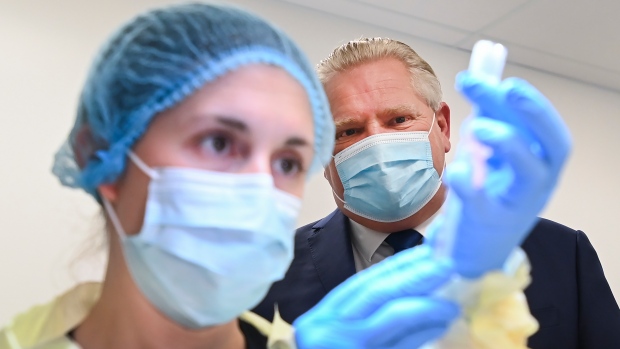 TORONTO — A spokesperson for the Ontario government says that Premier Doug Ford has started reaching out to international allies in an effort to secure more COVID-19 vaccines.

“While we wait for a federal decision on the lowering of the age limit for AstraZeneca, and in response to the latest cut in Moderna shipments, the Premier has begun reaching out to consulates to try and secure more vaccine supply for Ontario from our international allies,” the government said in a statement issued Sunday.

The provincial government has maintained that its vaccination rollout has been hampered by federal supply issues since it began administering shots in December.

Last week, Moderna informed Canada that the next expected vaccine shipment of 1.2 million doses that was scheduled for the end of April — of which Ontario was set to receive some 500,000 — will be actually be closer to 650,000 doses.

At the same time, the National Advisory Committee on Immunization has not yet changed its recommendation that the AstraZeneca shot only be offered to those 55 and up. Some public health experts have called for a lowering of age eligibility for the vaccine, which Ontario has the power to do, as case numbers and hospitalizations related to the disease surge in the province.

On Sunday, the province recorded 4,250 new COVID-19 infections, the fifth consecutive day in which case numbers have remained above 4,000. Meanwhile, there are a record 2,107 people in hospital with COVID-19 and of those patients, 741 are being treated in intensive care and 506 are breathing with the assistance of a ventilator.

The province has administered 3,837,881 vaccines across the province of the 4,852,885 it has received from Ottawa, according to federal data.

The province says that it has the capacity to administer more vaccines, but is lacking the supply to do so.

“Vaccines are our only way out of this pandemic and the Premier will exhaust every avenue he has in order to get more needles into arms of Ontarians sooner,” the government said.

On Friday, Prime Minister Justin Trudeau said that his government is “standing by” to deploy the Canadian Red Cross to help with Ontario’s vaccination efforts.

A spokesperson for Ontario Premier Doug Ford’s office said at the time that while the government “appreciates the Prime Minister’s offer,” the province’s priority is to obtain more doses of vaccine.

Late last year, the province of Manitoba inked a deal to purchase its own supply of a domestic COVID-19 vaccine candidate that is still in early phases of human trials.