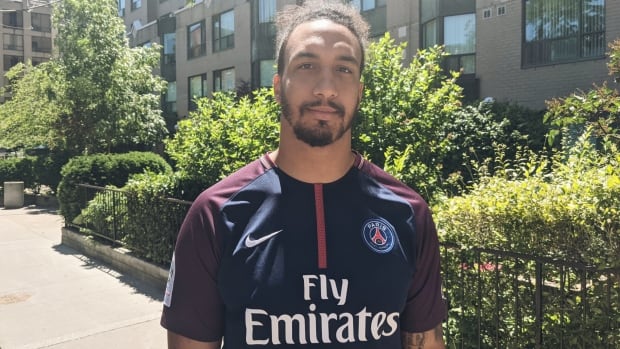 Chris Larsen, the Ottawa Redblacks player accused on social media but never charged of a hate-motivated assault on Toronto Island earlier this month, was one of six players let go from the team Thursday.

The team’s decision to release Larsen and the other players was for personnel reasons only and part of its “yearly process to bring the roster down to the allowable limit prior to the start of training camp,” according to a spokesperson for the team.

Larsen’s release follows his suspension from the team after the defensive lineman was accused on social media of participating in the beating of a member of an LGBTQ community on Hanlan’s Point June 5.

Larsen has previously told CBC News he went to Hanlan’s Point that day to celebrate the birthday of a friend who is part of the LGBTQ community.

Toronto police conducted an investigation and have charged two men in connection with the assault, 24-year-olds Elijah McGibbon and Felix Tauveron.

‘Wrong guy’ in ‘wrong place at the wrong time’

Larsen has not been charged and his lawyer, Calvin Barry, said his client was innocent.

“It’s somewhat suspicious,” said Barry of Larsen’s release from the Redblacks Thursday. “It just seems a little the timing couldn’t be more awkward but what are you going to do about it?”

Larsen was drafted in 2019 but hasn’t appeared in a game with the team.

Barry said it’s unclear what his client’s status is in the Canadian Football League because Larsen’s suspension was never lifted, but his client “just wants to make sure he can continue with his football career.”

Barry also said there is a number of remedies his client may pursue “in terms of libel and slander and defamation.”

“They had the wrong guy who happened to be in the wrong place at the wrong time.”