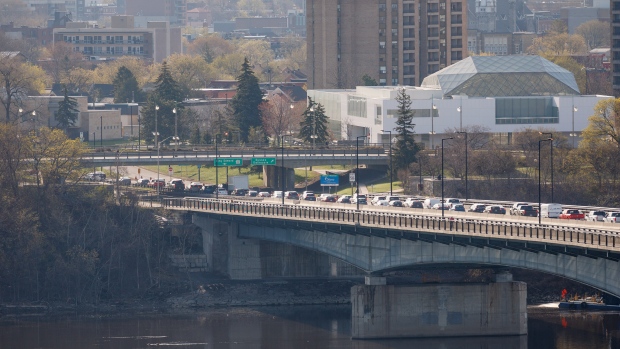 OTTAWA — Ontario-bound motorists, cyclists and pedestrians are being greeted by police checkpoints at all interprovincial crossings into Ottawa, as Ontario implements new restrictions to stop non-essential travel into the province during the COVID-19 pandemic.

Officers started screening travellers at all Ottawa-area interprovincial border crossings from Gatineau on Monday at 12:01 a.m.

Motorists were reporting traffic backups on the bridges between Gatineau and Ottawa, as well as other Ontario-Quebec border crossings.

The Ontario government announced the new travel restrictions into Ontario from the provinces of Manitoba and Quebec on Friday afternoon, as part of new restrictions aimed at reducing the spread of COVID-19.

Ottawa police officers will be stationed 24 hours a day, seven days a week on the Ontario side of the Champlain Bridge, Portage Bridge, Chaudiere Bridge and Macdonald-Cartier Bridge, as well as the Quyon and the Bourbonnais ferries.

Police say officers will also have a presence at the Alexandra Bridge, “as the Provincial Order also applies to pedestrians and cyclists.”

“We’ll only be stopping Ontario-bound passengers. We’re only going to be stopping private vehicles coming in from Quebec,” said Insp. Michel Marin during a Sunday afternoon media briefing.

“Commercial vehicles such as tractor-trailers will not be stopped. There are a number of compassionate grounds that exempt them from having any type of control, and we’ll be respecting those exemptions.”

Ontario Provincial Police will be setting up checkpoints along the Ontario-Quebec border in eastern Ontario and the Ottawa Valley.

Officers will be wearing personal protective equipment including masks and eye wear. Police ask members of the public to wear a mask when interacting with officers.

In a statement Sunday afternoon, Ottawa police said according to the new provincial powers, when approaching Ontario, a person may be stopped by police officers who may ask questions as to their purpose for entering the province.

“We will not be requiring any type of written documentation; it will be a verbal request and a verbal answer, and then they’ll be on their way,” said Marin.

Police say you will not be required to provide officers a note from an employer or a physician to prove the trip into Ottawa is essential.

“In the initial 24-72 hours of this operation, officers will focus on education and awareness,” police said.

Ottawa police says travel into Ottawa from Quebec is restricted, except for the following purposes

Ottawa Police say if the officer “reasonably believes that the person is not complying with the Provincial Order and is not entering Ontario for one of the permitted purposes, the officer can direct them to return to Quebec.”

Ontario Provincial Police said Sunday those travelling through Ontario to another location will be allowed into the province.

WHAT HAPPENS AT THE OTTAWA POLICE CHECKPOINTS

Ottawa police say you will be asked to provide your name, address and reason for travelling at the checkpoints. Insp. Marin says motorists, cyclists and pedestrians will not be required to provide documentation, such as a note from an employer or physician.

“We’re going to ask for the reason why you’re going into Ontario and then you’ll be sent on your way,” said Marin.

“We’re trying to plan this in a way that it’s going to be a very short conversation, and people will be allowed on your way. If we’re asking them to turn around for whatever reasons, we’ll be keeping tabs on that.”

Marin says Ottawa police expect most people to follow the rules and fines for failing to comply with the new regulations will not be necessary.

“I don’t see ourselves going into a position where we’re going to be providing fines for people that are constantly trying to come into the province without a good reason,” said Marin.

“Most people we’re dealing with have a good common sense approach to why we’re doing this, and the general public generally tends to be very cooperative and we’re not anticipating any major issues on those bridges.”

OC Transpo says transit vehicles will be permitted to pass through the police checkpoints set up at the Ottawa-Gatineau boundary.

“We don’t expect significant service impacts as a result, save for minor delays at the bridges,” said OC Transpo on Twitter.

The STO says its buses will be able to cross the bridges once the police checkpoints are set up.

An STO spokesperson tells CTV News Ottawa that police could enter the buses to validate the nature of the trips for passengers, and police may ask customers to get off the bus if the trip is not justified.

The STO is anticipating bus delays for entry into Ottawa.

The Quyon Ferry will continue to run between Ontario and Quebec.

In a statement on its website, the Quyon Ferry said, “The ferry will remain open even after the new rules come into place on Monday.

“From the announcement (Friday): Travellers who are coming into Ontario for work, medical care, transportation of goods and exercising Indigenous Treaty rights will be exempted.”

Ontario Provincial Police will be setting up checkpoints along the Ontario-Quebec border in eastern Ontario and the Ottawa Valley.

“We will be ensuring that travel for non-Ontario residents trying to enter Ontario is essential,” said OPP Commissioner Thomas Carrique in an interview with CTV News.

“Where it is not essential, we will be turning them away and not permitting entry into Ontario.”

The OPP will be using officers from across the province to set up the checkpoints at the 43 crossings between Ontario and Quebec and Ontario and Manitoba.

“We will be relying on overtime to fulfill this deployment,” said Carrique, adding 80 officers will dedicated to watching the 43 checkpoints.