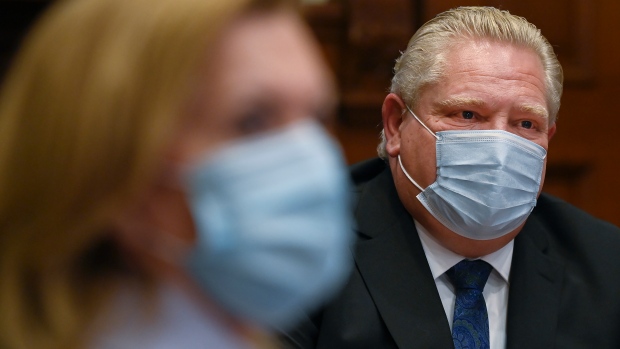 TORONTO — The Ontario government says it will reveal on Friday whether strict lockdown measures will continue in the province’s four COVID-19 hot spots or if they can begin to ease.

The announcement on whether Toronto, Peel Region, York Region, and North Bay will enter into the province’s colour-coded reopening system is expected to be announced on Friday afternoon.

If the province moves a region into the current colour-coded reopening system, many non-essential businesses would be allowed to reopen on Feb. 22 when the stay-at-home order is scheduled to be lifted.

Despite COVID-19 cases in Toronto and Peel Region on the decline, the top doctor in both regions has called on the province for current lockdown measures to be extended for at least two weeks.

“I have never been as worried about the future as I am today,” Toronto’s Medical Officer of Health Dr. Eileen de Villa said Wednesday afternoon.

She warned that with super-contagious variants of COVID-19 circulating the province, new infections could surge if the city reopens too quickly.

“By the time the confirmed case counts are big enough to shock us it will be too late to do anything, we will be in a third wave as bad as anything we have been through thus far,” de Villa warned.

Premier Doug Ford has previously said that if the province lifts COVID-19 restrictions, each local medical officer of health has the power to implement stricter measures in their own region.

Elliott was asked by a reporter at Queen’s Park on Thursday why Ontario wouldn’t immediately accept the recommendations by Toronto and Peel Region to extend the lockdown.

Elliott said the province will look at current COVID-19 case counts, hospital capacity levels, and the number of variant cases spreading before making a final decision.

“The physicians need to take a look at all of these pieces of information before reaching a final recommendation,” Elliott said.

On Tuesday, the stay-at-home order expired in 27 Ontario regions that moved into the colour-coded framework, which allowed for many non-essential businesses to reopen their doors to customers for the first time since Boxing Day.

NEW: Health Minister Christine Elliott says cabinet will meet tomorrow to decide whether Peel and Toronto will be moved into the re-opening framework on Monday.

The Ford government’s move to reopen parts of the province has been met with backlash from some medical experts, as well as NDP Leader Andrea Horwath, who believe it could spark a third wave of COVID-19 that leads to another lockdown.

“People are exhausted, and they need a break for sure, but bouncing back and forth into lockdown and having COVID-19 variants spread through Ontario is no solution for our province,” Horwath said while speaking with CTV News Toronto over the phone on Wednesday.

“And so by opening up again, without adding things, like measured layers, like paid sick days, for example, like safer schools, for example, like more support in long-term care, like a plan to actually roll out a vaccine program that people can make sense of, I mean, these things need to be in place, but Ford doesn’t want to spend the money.”

On Thursday, Ontario reported 1,038 new COVID-19 cases, which is a dramatic decline from when daily infection counts surged into above 4,000 in January.

Meanwhile, Williams said Thursday that the opinions of the local medical officers is “very important” in the decision making process.

He said it would be rare for him to disagree with local health officials on how strict COVID-19 measures should be.