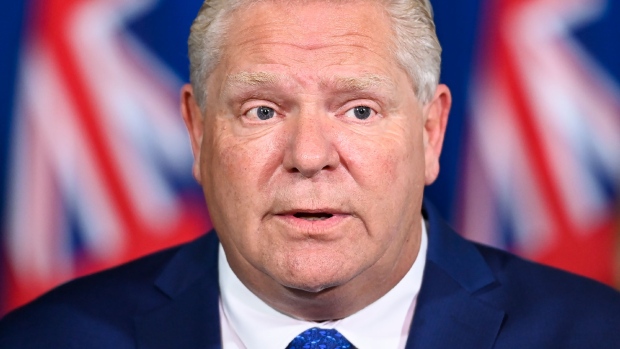 TORONTO — The Ontario government is still working on drafting specific “triggers” for when the so-called emergency brake can be invoked, despite the recent lifting of the stay-at-home order and the reopening of businesses in many parts of the province.

Premier Doug Ford told reporters on Tuesday that he wouldn’t hesitate to use the “emergency break” to move regions back into lockdown if COVID-19 cases spike due to spread of new, more contagious variants.

But at a subsequent news conference at Queen’s Park, Associate Medical Officer of Health Dr. Barbara Yaffe conceded that are not yet specific thresholds for when officials might consider using the mechanism.

“We have asked the public health measures table to give us more specific advice on triggers for the emergency brake but I would say that one of the big ones in the percentage of cases that are the variants of concern,” she said. “If we are starting to see an increase in a local health unit, I think that is a big concern and we would be discussing it immediately as an emergency with the local medical officer of health and determining what the appropriate measures would be.”

There have been 319 confirmed cases of variants of concern in Ontario, including 307 involving the more contagious strain of COVID-19 that was first detected in the United Kingdom.

Yaffe, however, said that seven per cent of the 14,000 samples tested since Feb. 3 have screened positive for variants of concern, pointing to more significant spread.

She did not say what proportion of cases would have to be identified as variants of concern in a given community to trigger additional restrictions but acknowledged that the head of Ontario’s science table, Dr. Adalsteinn (Steini) Brown, has warned that cases could “really skyrocket” once they make up 10 per cent of all infections.

He has also predicted that the variant that first originated in the United Kingdom will become the dominant strain by March and could trigger “exponential growth.

“I don’t want to say a certain number because sometimes it depends on the specific situation,” Yaffe said when asked about how widespread transmission of the variant would have to be to trigger the emergency brake. “It is more the trend and how it is being transmitted.”

The Ford government has already lifted the stay-at-home order in every public health unit in Ontario with the exception of Toronto, Peel, York, and the North Bay Parry Sound District Health Unit.

It has said that it wants to do the same in Ontario’s three hardest hit regions on Monday, though officials in Peel have asked that the stay-at-home order remain in place for an additional 14 days.

In an interview with CP24 on Wednesday, infectious disease specialist Dr. Issac Bogoch said that the emergency brake is the “most helpful tool” in the province’s reopening strategy and needs to be used in a “smart manner.”

“If they pump the brakes where case numbers start to plateau or rise and they jump on this early, early, early, yes I think we can navigate the next couple of months in a meaningful way with vaccines rolling out and we’ll get through this without a third wave,” he said. “But if you don’t navigate this well and you don’t use that emergency brake in an appropriate manner and you are not quick then it would come to nobody’s surprise that we will see a bump in cases, whether it is a wave lift or a full-blown wave.”