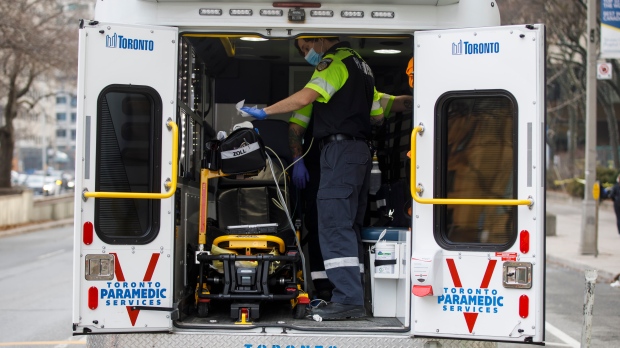 TORONTO — Ontario health officials are reporting more than 1,000 new cases of COVID-19 for the second straight day as the province continues to grapple with an increase in deaths related to the disease.

The province confirmed 1,150 new cases of the novel coronavirus on Friday, after 1,038 infections were reported on Thursday. The province’s positivity rate remained low on both days.

With just over 65,000 tests completed, the Ontario Ministry of Health reported the province’s positivity rate on Friday stood at 2.1 per cent.

Eighteen of the deaths reported on Friday are residents in long-term care homes. In total, the province has recorded 6,820 deaths related to the novel coronavirus since the start of the pandemic

Officials reported that at least 689 people are currently in hospital due to COVID-19, including 269 who are in intensive care, and 190 who are breathing with the assistance of a ventilator.

The province also deemed 1,255 more cases of the disease to be resolved as of Friday, bringing Ontario’s number of recovered patients up to 273,401.

Friday’s report brings the total number of lab-confirmed cases in Ontario to 290,771, including deaths and recoveries.

Where are the COVID-19 cases in Ontario?

Most of the new cases are concentrated in hot spot regions in the Greater Toronto Area. Officials reported 376 new cases in Toronto, 264 in Peel and 108 in York Region on Friday.

Most other regions in Ontario reported fewer than 75 new cases. Twenty-seven of these regions transitioned into the province’s colour-coded reopening framework on Tuesday. Three regions already transitioned last week.

Toronto, Peel Region, York Region and North Bay Parry Sound District are not included in the regions moving into the tiered system and the province says its stay-at-home order will remain in place until at least Feb. 22.

Toronto and Peel Region both advised the province on Wednesday to extend the current strict lockdown measures for an additional two weeks past the original deadline. The Ontario government will reveal its decision on reopening today.

Provincial health officials reported that about 79.2 per cent of the variant cases were associated with an outbreak or were a close contact of a confirmed case. About 7.1 per cent of cases were linked to travel, while about 12.9 per cent had no known epidemiological link.

Last week, modelling data warned that the COVD-19 variants could lead to a possible third wave of the disease. They noted, however, that aggressive vaccination and a stay-at-home order could help combat the spread of these more-contagious variants.

A total of 217,715 people in Ontario have received both doses of the COVID-19 vaccine and are now fully immunized against the disease.

NOTE: The numbers used in this story are found in the Ontario Ministry of Health’s COVID-19 Daily Epidemiologic Summary. The number of cases for any city or region may differ slightly from what is reported by the province, because local units report figures at different times.