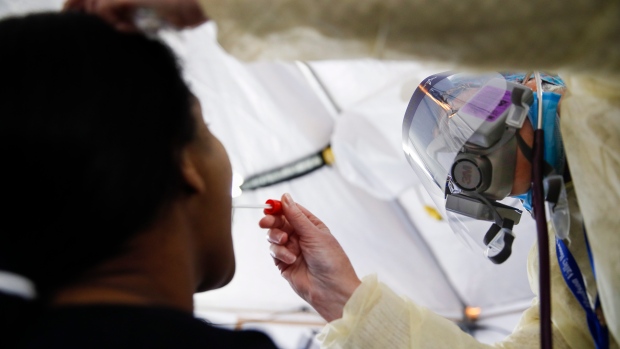 Tuesday’s case count marked the lowest number of daily reported infections since the beginning of March.

Ontario’s rolling seven-day average now stands at 1,441, down from 2,131 at this point last week.

With 37,705 tests processed in the past 24 hours, the Ontario Ministry of Health says the positivity rate dropped significantly from 5.3 per cent on Wednesday to 3.6 per cent on Thursday.

The last time the province reported a positivity rate this low was in March.

Health officials also reported that 19 more people have died due to COVID-19. In total, the province has seen 8,697 deaths related to the novel coronavirus.

There are currently 1,072 people in hospital due to the disease. At least 650 of these patients are in intensive care and 452 are breathing with the assistance of a ventilator.

The province deemed 2,302 more cases of the disease to be resolved as of Thursday, bringing Ontario’s number of recovered patients up to 501,942.

Thursday’s report brings the total number of lab-confirmed cases in Ontario to 527,180, including deaths and recoveries.

WHERE ARE THE COVID-19 CASES IN ONTARIO

All other regions in the province reported fewer than 75 new cases.

Officials identified four new cases of B.1.351 (South African variant), bringing the total case count in the province to 840.

In addition, the province added 39 more cases of P.1 (Brazilian variant), which brings its total number of cases to 2,544.

Ontario does not currently report how many cases of the B.1.617 variant, originally found in India, are found in the province.

However, officials recently stated that Ontario’s count of known examples of the B.1.617 coronavirus variant grew nearly six times in the span of a week in May, and added the province is still a “few weeks” away from being able to disclose new findings publicly in real time.

Public Health Ontario said the number of known positive cases of the B.1.617 coronavirus variant grew from 45 to 260 from May 12 to May 19, and is almost certainly higher today.

The B.1.617 coronavirus variant and two of its subtypes were first discovered in India and are to blame for a disastrous rise in transmission that has led to tens of thousands of deaths and a near complete collapse of the healthcare system.

The province reports that 594,854 people in Ontario have received both doses of a COVID-19 vaccine and are now considered vaccinated against the disease.

In the last 24-hour period, officials said 143,748 doses of the vaccine were administered to residents in the province. Officials have repeatedly said they have the capacity to give about 150,000 vaccines a day.

A total of 8,530,698 vaccine doses have been administered in Ontario since the rollout began earlier this year.

The numbers used in this story are found in the Ontario Ministry of Health’s COVID-19 Daily Epidemiologic Summary. The number of cases for any city or region may differ slightly from what is reported by the province, because local units report figures at different times