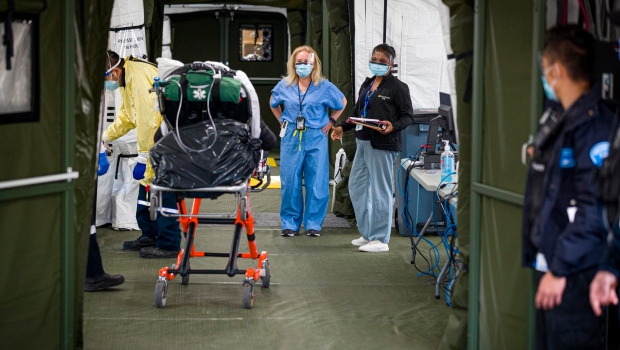 TORONTO — Ontario is reporting another single-day drop in the number of new COVID-19 cases but the province’s test positivity rate remains high.

Health officials reported 3,265 new COVID-19 cases on Tuesday, marking the fourth consecutive day in which the daily reported number of infections have decreased.

With only 34,000 tests completed in the previous day, the province said the test positivity rate stands at 10.2 per cent.

The province also reported 29 additional COVID-19-related deaths in the previous 24-hour period. In total, the province has seen 7,935 deaths related to the COVID-19 since the start of the pandemic.

The province also deemed 3,908 more cases of the disease to be resolved as of Tuesday, bringing Ontario’s number of recovered patients up to 404,248.

Saturday’s report brings the total number of lab-confirmed cases in Ontario to 452,126 including deaths and recoveries.

As of Monday, there were 2,336 people hospitalized with COVID-19. Of those patients, 875 are being treated in intensive care units and 589 are breathing with the assistance of a ventilator.

Where are the COVID-19 cases in Ontario?

Most of the new cases reported on Tuesday are concentrated in hot spot regions in the Greater Toronto Area. Officials reported 1,044 new cases in Toronto, 673 in Peel Region and 452 in York Region.

There were 119 new infections reported in Hamilton and 138 cases in Halton Region.

The report does not include any reference to the B.1.617 variant, originally found in India, despite Ontario confirming at least 36 cases of it in the province. It’s not clear if more variant cases have been identified since then.

The province reports that 362,563 people in Ontario have received both doses of the COVID-19 vaccine and are now considered immunized against the disease.

In the last 24-hour period, officials said that 94,819 doses of the vaccine were administered to residents in the province.

The province has repeatedly said it has the capacity to administer 150,000 doses per day.

Since COVID-19 vacccines starting rolling out in Ontario, nearly 4.9 million people have recieved at least one dose.

The numbers used in this story are found in the Ontario Ministry of Health’s COVID-19 Daily Epidemiologic Summary. The number of cases for any city or region may differ slightly from what is reported by the province, because local units report figures at different times.