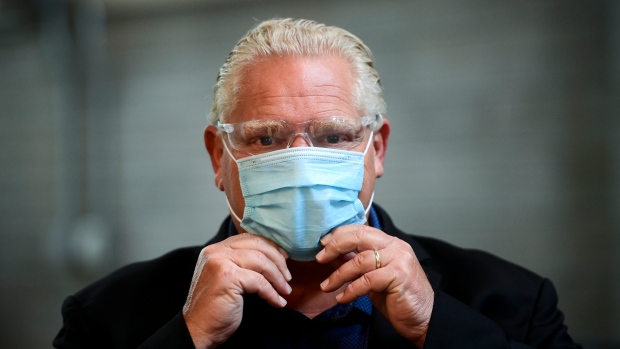 TORONTO — Ontario Premier Doug Ford will make another announcement Monday after he held a rare weekend news conference to expand COVID-19 restrictions on private gatherings across the province.

The premier will be joined by Health Minister Christine Elliott and Ontario’s Associate Chief Medical Officer of Health Dr. Barbara Yaffe to speak at Queen’s Park at 1 p.m.

The three were also present at Saturday’s announcement when they announced that the private gathering limits imposed on hotspot regions will now affect the entire province.

Only 25 people are now allowed to gather outdoors and 10 people can gather indoors as the province struggles with a second potential COVID-19 wave.

The new rules will not impact “staffed businesses and facilities,” such as restaurants, movie theatres, and banquet halls, and they will still be permitted to host 100 people outdoors and 50 people indoors.

“Over the past several days, we’ve seen alarming growth in the number of COVID cases in Ontario. Three weeks ago, we were around 80 cases, a week ago we were around 200 cases, now we are over 400 cases and climbing,” Ford said on Saturday.

“Folks, the alarm bells are ringing.”

Ford said the new rules are in effect immediately and will stay in place for the next 28 days.