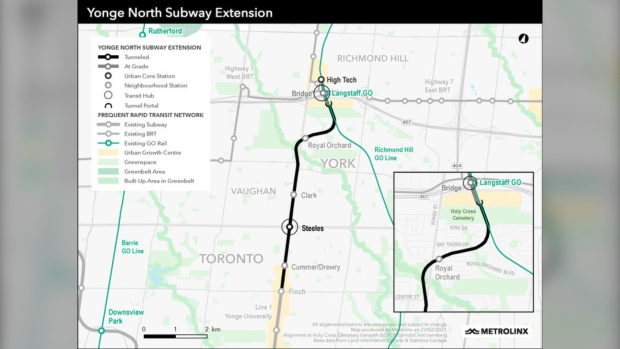 TORONTO — The Yonge North subway extension will include a fourth station at Clark Avenue in Thornhill, the Ford government has announced.

The province was initially planning to build six stations along the 8-kilometre route from Finch Station to just north of Highway 7 in Richmond Hill but in March it announced that it would eliminate two stations and move part of the route above ground after determining that the original plan would have seen the price tag rise from $5.6 billion to $9.3 billion.

At the time it identified three “core” stations that it would move forward with – Steeles Avenue, Richmond Hill Centre and Highway 7 at Highway 407 – and said that it would need further study to determine the location of the fourth station.

“The Yonge North Subway Extension will strengthen connectivity across the region, reduce travel times and greenhouse gas emissions, and provide more people with access to rapid transit. The new Clark Station is the clear choice to support all those key benefits,” Ontario Transportation Minister Caroline Mulroney said in making the announcement on Friday morning.

“With this alignment we can deliver the greatest number of stations for the growing communities of York Region while staying within budget, capitalizing on benefits, and providing better regional connectivity, including to GO Rail, York Region Viva and other transit options.”

According to a new analysis from Metrolinx, approximately 2,500 riders will use the subway at Clark Station during the peak of the morning rush, about half of which will be new riders that were not previously accessing the subway system.

The analysis says that the planned station at Clark Avenue “offers more benefits at lower costs with less complexity of construction” compared to the other two stations that were considered and is also “strategically superior” due to the fact that it will provide access to “key residential and employment growth areas at Promenade Centre and the Bathurst/Centre corridor.”

The analysis, however, suggests that the $250 million station will only provide about 60 cents worth of benefits for every dollar spent on the project.

Construction on the Yonge North subway extension is expected to begin in late 2023. The province has said that the project could be completed in 2030.