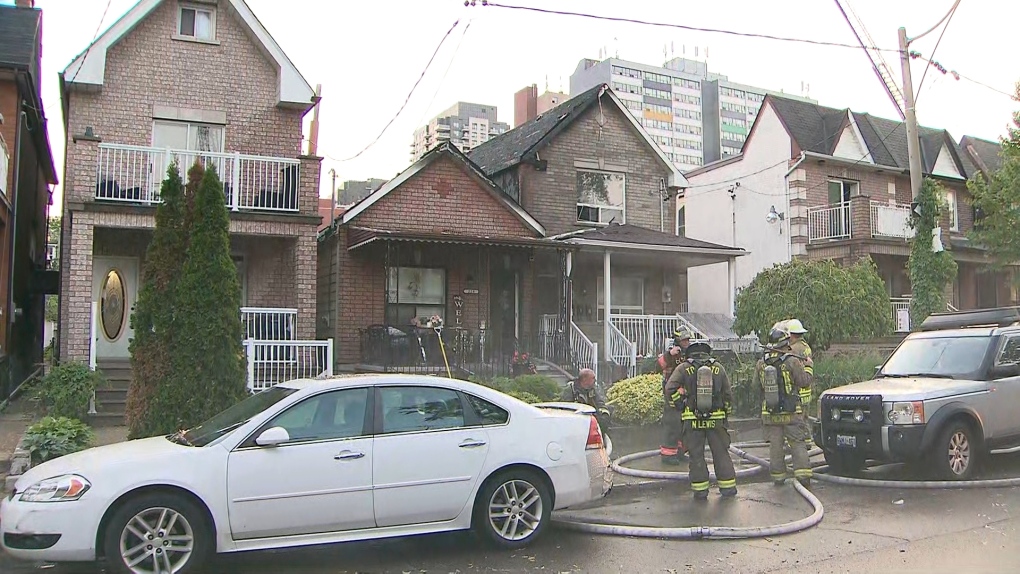 No injuries were reported after a three-alarm fire tore through one home and damaged another in Toronto’s west end Monday evening.

The fire broke out around 7:30 p.m. in the area of Emerson Avenue and Dupont Street.

Firefighters arrived on scene to find black smoke pouring out of one home, which was eventually engulfed in flames.

“There was lots of heavy black smoke. You couldn’t see the houses when we arrived,” Platoon Chief Tim Algar told CP24 at the scene.

Algar said the two homes affected are separated by just four inches and it’s not yet clear where the fire started.

“All we know is that it started at the rear,” he said.

A woman who lives at the home next door said she was cooking dinner when someone pounded on her door and told her that she and her kids needed to get out of the house.

“My girls were doing homework in the room. Someone started banging on my door and ringing my doorbell like crazy. I yelled at one of my girls to answer the door. She answered the door and all I heard was someone say ‘get out – there’s a fire.’”

The woman, who did not wish to be identified, said the home that went up in flames had been undergoing renovations.

She said she grabbed her kids and dogs and ran from the home.

“We’ve been standing here watching our house burn away,” she said.

She added she’s been told the “whole roof in the back half of my house is all gone.”

Several people had been inside carrying out renovations on the upper level of the home which was more severely damaged. Algar said they too had no idea the house was on fire until someone notified them.

“They had no idea until somebody knocked on their door and yelled in that there’s a fire at the rear and then they looked and saw it was fully involved at the rear,” Algar said.

Algar said both homes will likely have to be vacated for the time being because of the damage.

Toronto Fire Chief Matthew Pegg said the conditions for firefighters were “challenging” Monday, with a special weather statement in effect due to high temperatures in the city.

“An extremely challenging day for our @Toronto_Fire crews,” Pegg said in a tweet. “Dealing with 3 significant fires concurrently – one 3rd alarm fire on Emerson plus two 2nd alarm fires – Halsey Ave and Gerrard St East – even more challenging for our crews to work safely in high outdoor temperatures.”

Toronto is currently experiencing its first heat event of the season, with highs expected to hover around 30 C until Wednesday.

Algar said the conditions made it challenging to keep firefighters in good shape as they battled the flames.