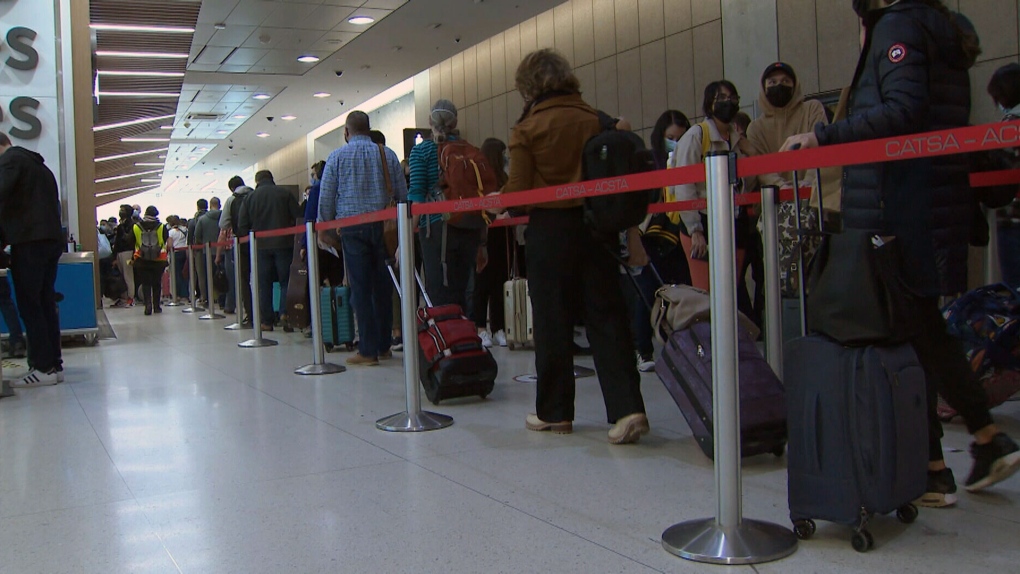 During a press conference on Monday morning, several Mississauga leaders called on the federal government to remove on-arrival random COVID-19 testing and duplicate health checks, which as of late have been especially problematic due to inadequate staffing levels at Canada’s largest airport.

“The recent travel experience will have detrimental and lasting effects on how our region is perceived on the international stage and is having negative impacts on new international investment for the Toronto region,” Victoria Clarke, CEO of Tourism Mississauga, said.

“Travel is meant to be a seamless experience and after years of suffering for our tourism sector, we should be working to remove unnecessary barriers to entry. During the height of the pandemic, our sector understood that we needed to make sacrifices for the good of the country, but now that these times are behind us, these obstacles have become impossible to justify.”

Clarke said before the pandemic it took on average 30 seconds to process an arriving passenger. Today, that wait can be four times longer, she said.

“The last thing we need is another hurdle that hampers our collective recovery.”

Trevor McPherson, chief executive officer of the Mississauga Board of Trade, said businesses in his city have been hit especially hard by the delays at the airport.

“The success of our business community depends on Pearson’s success,” he said.

“After years of challenges for our local travel economy and the loss of 94,000 jobs in Mississauga’s tourist-related industries during the pandemic, our businesses and visitors rely on a smooth and efficient airport process to access what our region has to offer.”

The chair of the Greater Toronto Airports Authority, which operates Pearson, said despite travel ramping up, traffic is only half of what it was before the pandemic.

Ellingham said he appreciates recent assurances from the federal government to address these issues, notably the hiring of more screening officers, but said more must be done.

He said the answer is a significant reduction in the aforementioned “COVID-19-related processes.”

“This is a step that can be taken immediately to smooth travel and encourage more passengers to travel through Canada. It is imperative that the government move to take this action now before it is too late,” he said.

Mississauga Mayor Bonnie Crombie said the tourism sector in her city and the whole of Ontario is dependent on Toronto Pearson International Airport being able to operate efficiently.

“That means giving passengers the best experience possible from the second that they walk through those doors,” said Crombie, who even offered to help federal governments in Canada and the United States find solutions like “eliminating

some of the duplication we’re seeing in screening, security and customs processes” and “calling for investments in recruitment strategies that will help get new staff trained and on-boarded as soon as possible.”

Today, the Office of Canada’s Minister of Health offered no guarantee that these requests would be heeded.

In a statement, the ministry said while the country is slowly starting to reopen and activities are resuming, it’s important to remember that the pandemic isn’t over.

That being said, travellers are being advised that they should still expect longer wait times at airports, “especially when arriving during peak times.”

“We are aware of long lines and delays at airports across the country and understand traveler frustration. As traveller volume increases, we have worked to build efficiencies and additional capacity at the border,” they said in a statement. “COVID restrictions and health requirements are continuously reviewed to ensure that they are current and relevant to protecting the health and safety of Canadians.”

The ministry said one way to “reduce congestion in airports and processing times” in crowded areas is for all air travellers complete their ArriveCAN submission ahead of time, which is mandatory for all travellers to Canada and required to qualify for the fully vaccinated traveller exemption from quarantine and testing. Anyone who fails to submit their travel info and proof of immunization using this system could be fined $5,000.

At this time, only vaccinated travellers are tested on-site and those selected for mandatory random testing are given test kits to use at home.

In a May 27 release, the Government of Canada said it is working with airports and air carriers to “quickly address delays while continuing to maintain adequate security screening.”

Specifically, an outbound screening committee is being created to address bottlenecks at pre-board security screening and pre-clearance departure checkpoints and develop new approaches to dealing with these “pressure points in the travel system.”

An additional 400 screening officers have also been hired across the country to work at passenger checkpoints. These new employees are set to be deployed between now and the end of June.

The government said the Canadian Air Transport Security Authority is “very close” to recruiting all of its additional summer screening officers at many airports, including at Person.

Pre-certified screening officers are also now carrying out other non-screening functions so certified officers can focus on their key functions.

Scheduling is also being adjusted to best support busy travel times, and best practices are being studied to see where these processes can be applied to other airports.

Among other things, the Public Health Agency of Canada is removing mandatory random testing for international to domestic connections.

At Pearson, Canada Border Services Agency is adding 25 kiosks to speed up processing time as well as increasing available officer capacity and easing the return of student border services officers. Travellers age 16 and older can use new eGates there to verify their identity and submit their customs and immigration declaration.

“While more remains to be done, these efforts are paying off through declining wait times for screening,” the statement issued by Minister of Transport Omar Alghabra and Minister of Public Safety Marco Mendicino read.

“Since the beginning of the month, the number of passengers waiting 30 minutes and more for outbound screening at our largest airports (Toronto Pearson International, Vancouver International, Montreal Trudeau International and Calgary International), has been halved across all four airports.”