Jimmy Vesey scored twice to snap a long goal drought and Frederik Andersen made 26 saves in his return from injury as the Toronto Maple Leafs completed a three-game sweep of the Edmonton Oilers with a resounding 6-1 victory Wednesday.

John Tavares and Zach Hyman, with a goal and an assist each, William Nylander and Ilya Mikheyhev provided the rest of the offence for Toronto (18-4-2).

Jason Spezza added three assists and Travis Boyd chipped in with two for the Leafs, who thumped the Oilers by a combined 13-1 score over a dominant nine periods that saw NHL scoring leader Connor McDavid held without a point.

Ryan Nugent-Hopkins replied for Edmonton (14-11-0), which had won five in a row and 11 of its last 13 before the NHL and North Division leaders arrived at Rogers Place. Mike Smith stopped 26 shots.

Auston Matthews, who leads the league with 18 goals, also returned to the lineup for the visitors after missing the last two games with a sore wrist/hand, but was held off the scoresheet.

It didn’t matter on this night. 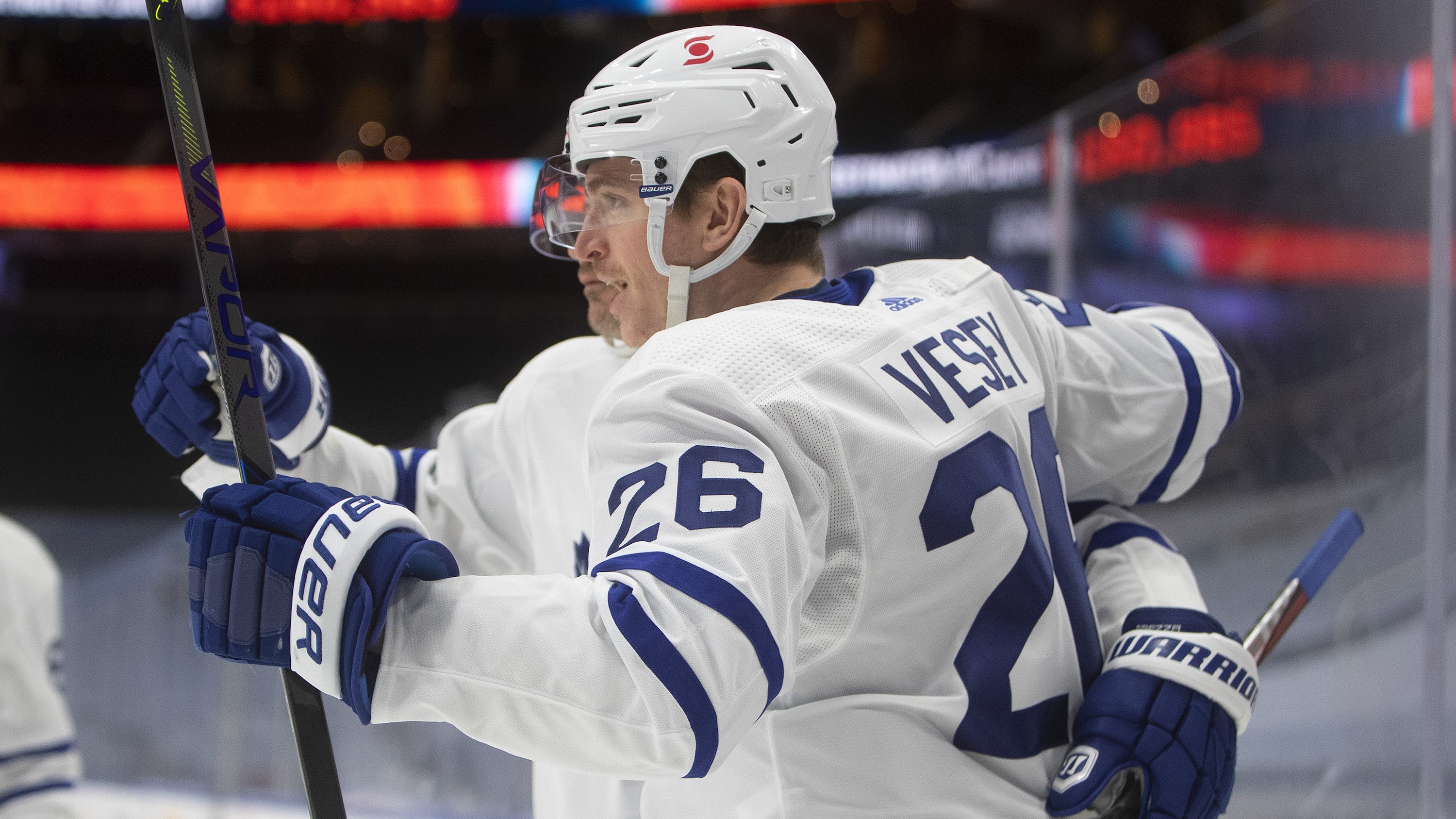 The Leafs blanked the Oilers 4-0 in backup goalie Jack Campbell’s return from a leg injury Saturday before third-stringer Michael Hutchinson produced a 3-0 victory behind Toronto’s stifling defensive structure with the team’s No. 1 and No. 2 netminders unavailable Monday.

Andersen, who missed four games with a lower-body injury, wasn’t able to keep the shutout streak going, but Toronto won’t mind following three statement performances in improving to 5-1-1 against Edmonton in the pandemic-shorted 2020-21 season.

The Leafs open a two-game series in Vancouver against the Canucks on Thursday, while the Oilers host the Calgary Flames on Saturday before welcoming the Ottawa Senators for three straight.

Edmonton shook up its top-6 forward group early, looking for a spark, with James Neal going from the press box to the first line alongside McDavid and Jesse Puljujarvi, while Nugent-Hopkins was reunited with Leon Draisaitl and Kailer Yamamoto.

The Oilers came out firing with five shots in just over two minutes to open the first period, but Andersen, like Campbell and Hutchinson in the two previous contests, weathered the early storm.

Toronto found its legs as the frantic pace continued, with Matthews showing no lingering injury issues by wiring a shot off Smith’s far post before the Oilers netminder stopped Joe Thornton on the follow.

The Leafs nudged in front at 9:03 thanks to their fourth line when Spezza’s pass in front to Boyd instead found a hard-charging Vesey off the bench to bury his third of the season and first in 18 games.

This season has seen both players and teams pull off impressive streaks, but as Rob Pizzo shows us this is nothing new. 1:57

Toronto made it 2-0 at 2:57 of the second when Boyd and Spezza combined to set up Vesey, who took a cross-check in the neck from Alex Chiasson after Monday’s final buzzer that resulted in a one-game suspension, for his second of the evening after Edmonton got its wires crossed in coverage.

After the Leafs’ top-ranked road power play connected on its only opportunity Saturday and its first chance Monday, Tavares scored six seconds into Toronto first man advantage when he took a little pass from Thornton in front to bury his fifth at 4:44.

Mikheyev then made it 4-0 with his third at 7:02 on a pass from Zach Hyman as the Leafs scored three times in 4:05 and held a stunning 11-0 edge on the Oilers through in just over 147 minutes of action.

Nugent-Hopkins finally broke Toronto’s shutout streak at 13:46 when he banged home a Draisaitl rebound for his 10th.

Edmonton came close to getting within two not long after that, but Leafs defenceman T.J. Brodie snuffed out Draisaitl’s wraparound attempt.

Nylander put the game out of reach with 98 seconds left in the period off the rush when he dragged the puck around sliding Oilers blue-liner Caleb Jones before snapping his 10th, and fifth in his last four games, past Smith to make it 5-1 through 40 minutes. 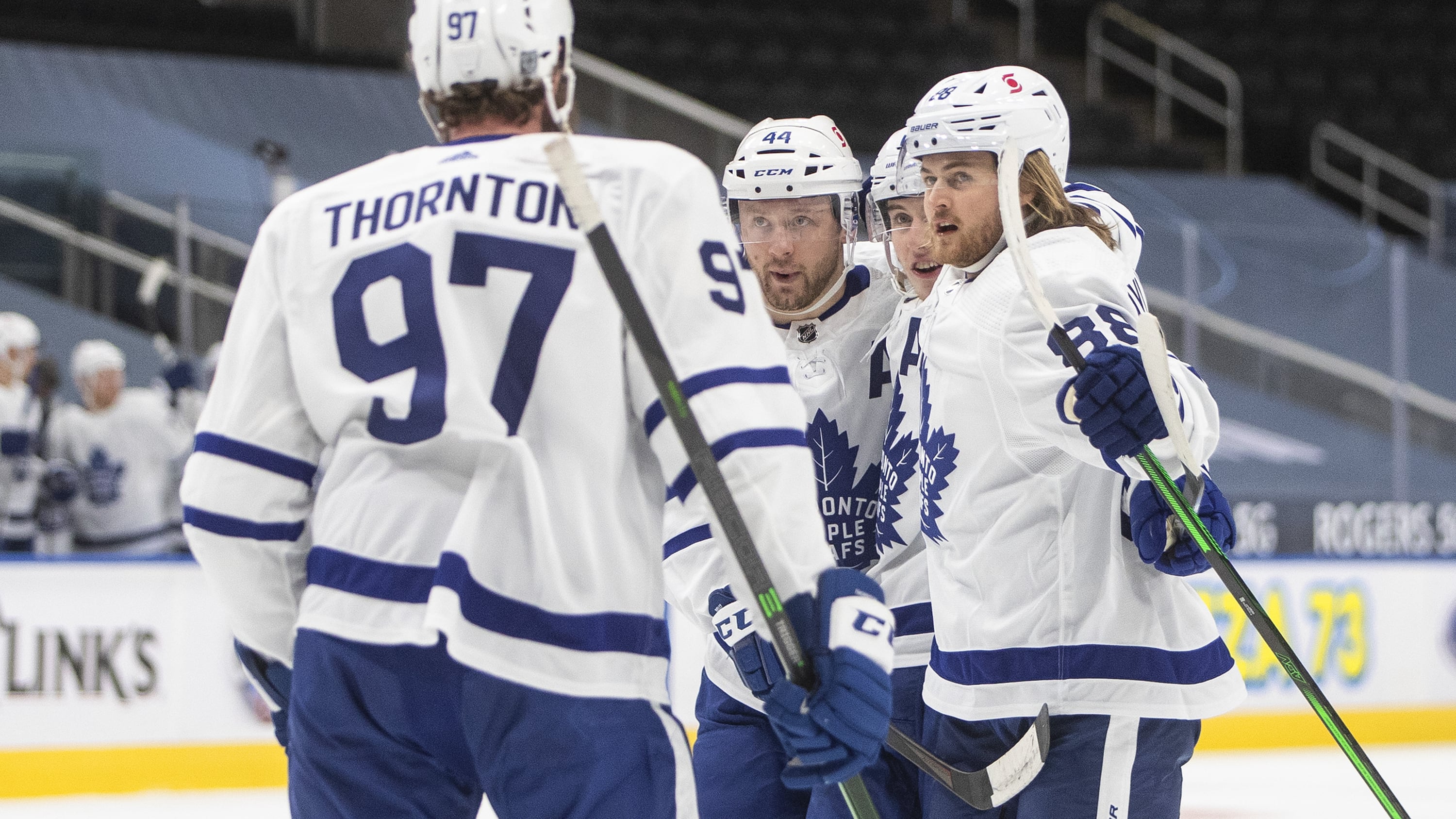 William Nylander’s beauty gives Toronto a 4-goal lead. The Maple Leafs forward has recorded 5 goals in his past 4 games. 1:11

Andersen, who improved to 15-1-2 all-time against the Oilers, stopped Draisaitl on a short-handed breakaway early in the third.

Hyman continued the onslaught on a power play at 10:33 when he took Spezza’s initial shot in the midsection before sweeping his seventh past Smith.

Coming into Wednesday, McDavid had been held pointless in back-to-back games 19 times in his career. He had a combined 14 goals and 17 assists in his next outing, but was unable to get anything going on another miserable, frustrating night for Edmonton.