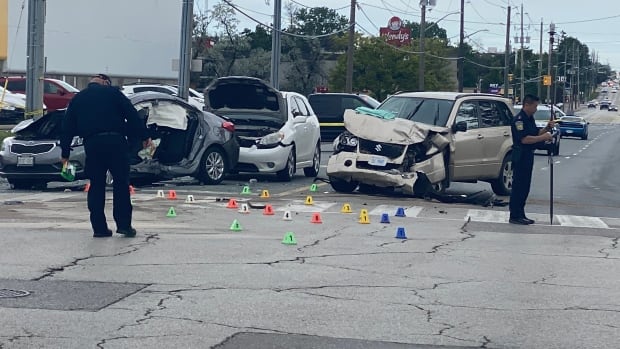 A man is dead and a woman is in custody after a four-vehicle crash in Brampton Thursday morning, Peel police say.

Officers were called to the area of Main Street North and Vodden Street East just before 8:45 a.m.

Emergency crews arrived to find a man with life-threatening injuries, police say. He was transported to hospital, where he later died.

Police say the woman was taken into custody, but could not say how she was involved. Charges are pending, said Peel police spokesperson Const. Donna Maurice.

Anybody who may have been in the area at the time and heard or saw anything is being asked to contact police. Investigators also want to hear from anyone in the area who may have dash cam video.

Police say the intersection will be closed “for a number of hours” while the major collision bureau investigates.