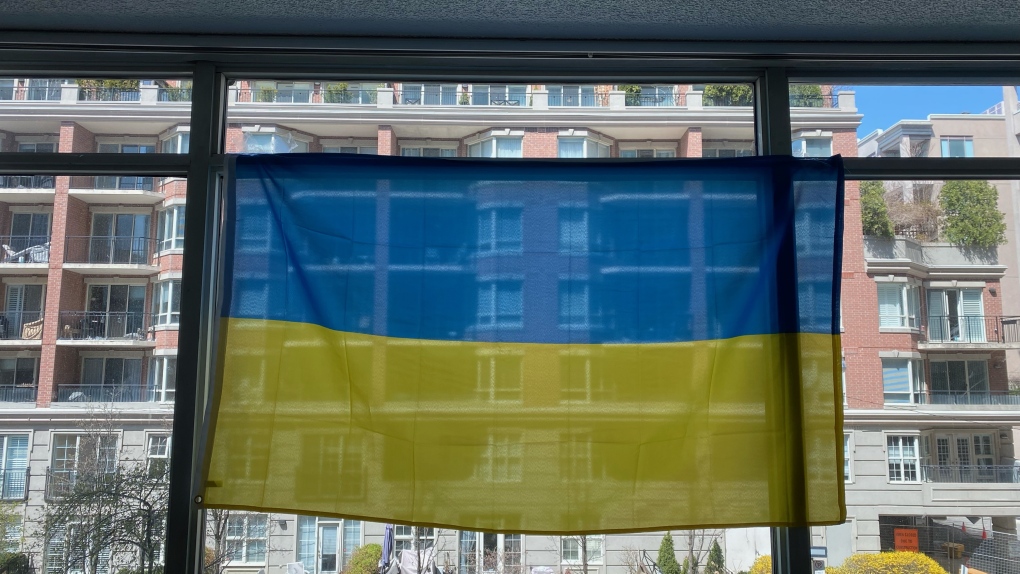 A Toronto condo owner says she was told to remove a Ukrainian flag from her apartment window by the property management company that oversees operations at the building.

Anastasia Pioro, who is of Ukrainian descent and has family in Ukraine, said the flag and other signs of support for the war-torn country have been hanging from her third floor apartment window without issue since Russia invaded Ukraine on Feb. 24.

But on Saturday, she said she received a phone call from the building’s superintendent asking her to remove the flag due to complaints he had received from other tenants and the possibility of vandalism.

She refused and was informed that she was in breach of a building bylaw. Pioro said she was told she would receive a formal notice of violation from the property management company.

“So then I asked him, ‘who’s complaining and why are they complaining?’ I don’t understand what’s so wrong,” Pioro told CTV News Toronto. “He said, ‘well how would you feel if all the Russians in the building put up their flag?’”

A copy of the bylaw that Pioro is accused of violating, which was viewed by CTV News Toronto, indicates that, “No window, visible from the exterior, shall have a window covering that is anything other that white or off-white.”

Pioro said she and her partner Mykyta Hreidin — a Ukrainian expat currently in Spain working to register his mother and siblings as refugees — feel “disrespected” by the action.

She explained that calling Hreidin and explaining the situation before removing the display was “one of the most horrible things” she’s ever had to do.

“Now it’s just folded, sitting on my chair,” Pioro said. “I was forced to be silent.”

Pioro said the removal of the flag had an especially chilling effect on her mother, who was born and raised in Soviet-era Ukraine.

“She said, “I’m 62 years old and my entire life I was told by Russian people to be silent. I was told I should be embarrassed to be Ukrainian,” Pioro recalled. “She said, ‘You folding this flag is like this generation still being asked to be silent.”

CTV News Toronto has reached out to the building management company for comment on this story.

While the blue and yellow flag has become a rallying cry since Feb. 24 wherever Ukrainian roots can be found, the practice of property management companies mandating what can and can’t be placed in public-facing windows is commonplace, experts say.

“It all depends on the written rules of the condo corporation,” John Andrew, a private commercial real estate and urban planning consultant who worked as a professor at Queen’s University and served as director of its Real Estate Roundtable explained.

“It is common for there to be prohibitions against displaying things on the outside of one’s unit or visible from the outside. This would include a flag, in most cases. So, it’s not likely about stopping a political statement — more about general rule.”

Moreover, as Toronto real estate lawyer Bob Aaron sees it, the bylaws put in place by a property management company need to be followed as part of the tenant or owner’s agreement to inhabit the space.

“It’s not a question of legal or illegal. The issue is whether the condo bylaws prohibit attaching anything to the exterior of the building, which is common,” Aaron said.

Aaron said there is case law that supports the prohibition of certain items by building management and that a tenant or owner must abide by those rules or potentially have further action taken against them.