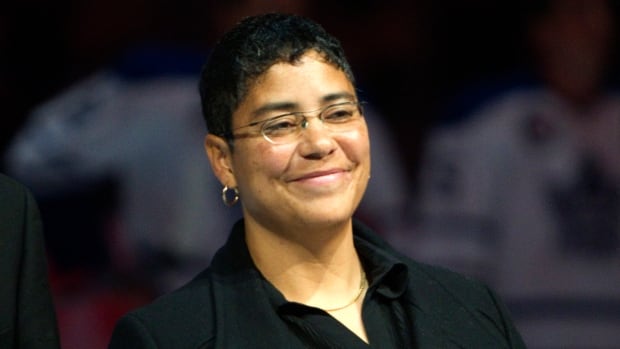 Hockey Hall of Famer Angela James has taken over as general manager of the Toronto Six women’s pro hockey team.

The 57-year-old from Toronto stepped into the job two months after assuming an ownership stake in the Premier Hockey Federation team alongside former NHL player Anthony Stewart and coach Ted Nolan.

“I’ve had 35 years of sports administration experience, so this was an easy fit for me,” James said Tuesday in a statement released by the Six.

James was a Six assistant coach to Mark Joslin last season when Toronto finished second in the six-team league with a 16-3-1 record. The Six lost to the eventual Isobel Cup champion Boston Pride in a playoff semifinal game.

James replaces Krysti Clark, who was Toronto’s GM for one season.

“I have made the difficult decision to not continue on in my role as General Manager,” Clark said Monday in a Twitter post.

A star on the Canadian team before women’s hockey became an Olympic sport, James was one of the first two women inducted into the Hockey Hall of Fame in 2010 alongside Cammi Granato.

‘I’m really excited about the fact that I’m a part of a new beginning for professional women’s hockey players getting paid a really good contract,” James said.

After two seasons with the Six, star forward Mikyla Grant-Mentis signed a one-year contract with the Buffalo Beauts last month worth a reported $80,000.