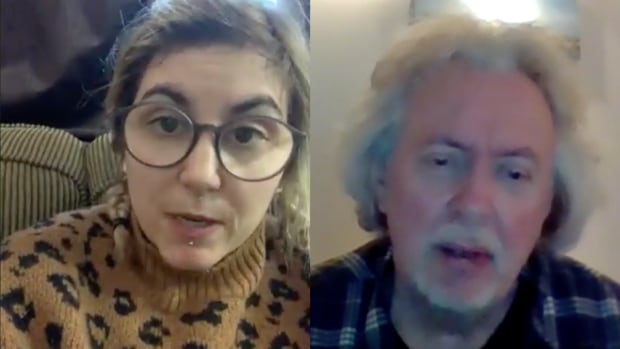 A Hamilton woman is trying to get her father back to Canada after he left to visit a dying relative in the United Kingdom.

Sarah O’Carroll, 30, said her worries are growing with a new variant of COVID-19 circulating in the U.K.

Her father Jim, 66, is immunocompromised.

“I’m worried about him because if he doesn’t have a safe place to stay, there’s more at risk of contracting the virus, more at risk contracting it in U.K. rather than him being self-isolated in Toronto,” she said in an interview on Tuesday.

Provincial health officials say modelling and epidemiological studies suggest the variant can spread more easily and faster than the original version of the novel coronavirus — but is not believed to be more deadly.

Four confirmed cases the variant have appeared in Canada as of Sunday.

Jim, who lives in Oakville, Ont., said he arrived in the U.K. on Dec. 6 after learning a relative’s condition was deteriorating.

“There was a certain hesitation to coming here given the circumstances,” he told CBC News during an interview from London after he returned from Heathrow Airport on Tuesday having had no luck finding a flight home.

“The government should be paying more attention to its citizens.”

Global Affairs Canada previously told CBC there were 11,038 Canadians registered as being in U.K.

Canadian High Commissioner to the U.K. Janice Charette said staff at Canada House in London and the Global Affairs Emergency Watch and Response Centre in Ottawa have been working to respond to calls and email inquiries.

“If travel plans back to Canada have been affected by the recent measures, our best advice is that Canadians in the U.K. contact their airline and their travel insurance to discuss alternatives and/or compensation,” Charette said in a statement. “Travellers are advised that conditions on travel can change quickly and without notice.”

Charette noted that alternative routings may require a recent negative PCR test before boarding and that travellers should verify with their airline when booking.

The pandemic has made death lonelier and disconnected family members since it began in March, but Jim said he felt he needed to be with his relative.

He had been staying in an Airbnb while visiting the terminally ill family member. His plan was to return to Toronto and quarantine in another family member’s vacant apartment. Things haven’t gone as planned.

Jim said he’s spoken with consular services and Air Canada, and has booked multiple flights, including one on Christmas Day, but travel restrictions prevented him from leaving. The federal government temporarily halted flights from the U.K. on Sunday.

Canada has ‘no plans’ to repatriate citizens

Sarah said her father had to visit the U.K. in March for the same reason. That time he narrowly escaped being stuck. Now she’s not sure what will happen.

Jim had been staying at an Airbnb, but that accommodation ended on Saturday.

On Sunday he said he had found a place to stay while he continued “considering his alternatives,” adding he will also need to restock his supplies and medication.

Christelle Chartrand, a spokesperson for Global Affairs Canada, said in an email that the government has advised Canadians to avoid non-essential travel outside of the country since March 13.

“As we have been saying, there are no plans to offer repatriation or assisted departure flights. We are aware of Canadians abroad seeking to return to Canada following recent developments in the United Kingdom,” Chartrand wrote.

“We continue to provide consular services to assist Canadians who remain in the United Kingdom. The government of Canada takes the safety and security of Canadians abroad very seriously and provides credible and timely information in its travel advice.”

Jim said the government didn’t offer him much information in response to his questions about returning home.

He and his daughter also wrote to their local MP Anita Anand. Her office didn’t comment about Jim’s situation when asked about it.

“It’s disheartening,” he said on Thursday.