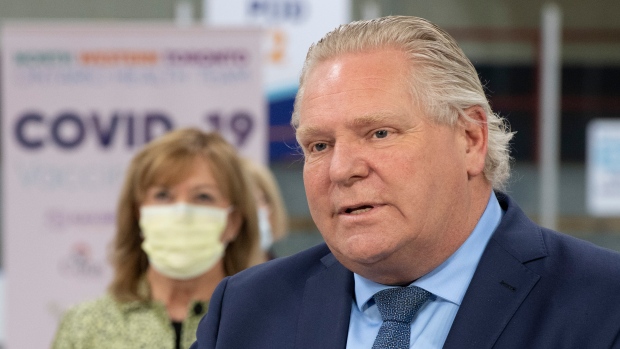 TORONTO — Ontario Premier Doug Ford has shifted his focus away from the immediate COVID-19 response and is “devoting his time” to vaccine procurement, according to his deputy premier, as critics openly call for Ford’s resignation over his handling of the third wave.

Ford was absent from the Ontario Legislature for the second day in a row Tuesday and has not held a news conference since last Friday, when the government’s new measures to battle the pandemic were met with outrage, condemnation and ultimately led to reversals by his government.

On Monday, the Premier’s Office released a statement saying Ford had been in touch with Canada’s ambassador to Denmark, the Consulate General of the United States, the EU ambassador to Canada and the High Commissioner of India to inquire about purchasing additional doses of the AstraZeneca vaccine for Ontario.

“The premier is looking at other jurisdictions where we may be able to buy some of the vaccines directly,” Elliott said on Tuesday.

Critics counter that the federal government is responsible for procuring vaccines and dealing with the consequences of delays, and the premier should focus on the primary fight at hand.

“What the premier needs to do is stay in his lane,” said Liberal MPP John Fraser. “The premier’s job is to [implement] the public health measures necessary that people need to get through this pandemic.”

Politicians also raised concerns about an upcoming virtual fundraiser Ford is set to hold for the Progressive Conservative party, along with Ministers Steve Clark and Lisa Thompson this week.

Billed as “an evening with PC Leader Doug Ford,” the $1,000-a-ticket fundraiser promises participants can engage in a discussion with Ford “on the issues facing our province during these challenging times” and the government’s response.

Green Party Leader Mike Schreiner said it’s “disgusting” for the premier to focus on fundraising when “people are literally dying.”

NDP Leader Andrea Horwath says the premier needs to be “visible and accountable” to the entire province.

“People are dying in this province because of the decisions this government has made because of the premier’s unwillingness to take the advice of experts,” Horwath said.

“It’s shocking how upside down the premier’s priorities are.”