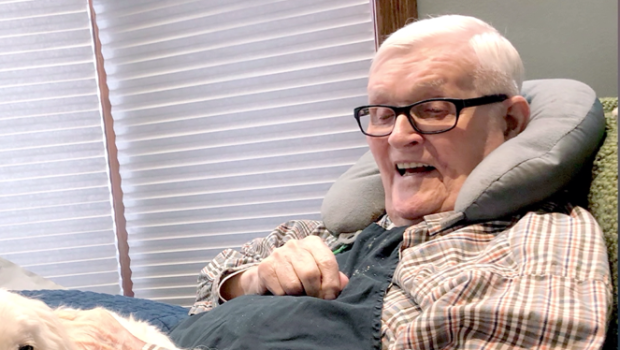 TORONTO — A Scarborough family fears it will be fall before all Toronto homebound seniors get their COVID-19 vaccine.

The family of an elderly homebound senior says it does not make sense that this vulnerable group is not being prioritized. Tom Fitzpatrick, 97, finally got his jab today when a Toronto paramedic arrived at his Scarborough home armed with a vaccine.

“We are so relieved he has finally got his vaccine,” his daughter Mary Fitzpatrick said.

She had been advocating for seniors who are homebound and unable to get vaccinated. But now that her father is vaccinated, her family worries about the other 5,000 homebound seniors still waiting.

Fitzpatrick’s son-in-law Harry Hum is concerned about the dangerous spread of the deadly virus.

“One of the things we feared the most was last year caregivers going from one congregate setting to another, that is how it passed and that is what we feared here. And finally he has it but it is not over, there are still over 5,000 patients that are in the same situation.”

Toronto EMS has been tasked with the job of vaccinating the homebound and are reaching between 150 and 175 patients every week. But Fitzpatrick’s other daughter, Ann, worries seniors will die before they get a shot.

‘I’ve calculated that that is going to take until late October, late November before they are all vaccinated. And I think that is just terrible planning in the midst of all these dangerous variants and the risk of hospitalization of these very vulnerable seniors at a time that our hospitals are already in crisis.’

Asked about the situation today, Toronto’s Medical Officer of Health told CTV News Toronto she hopes more supply will improve the situation for the homebound.

“That frees up some of our mobile capacity in a greater way so that we can get to those who are truly homebound and would have extreme challenge if not complete impossibility to get to clinics outside, as we are able to redeploy resources we should be able to get their faster.” Dr. Eileen de Villa said.

Toronto Mayor John Tory points out, logistically, it is time consuming to go door to door.

“Each of the calls to homebound people takes a lot longer because you’re dealing with only one person and a full, you know, crew of people as it were, have to go and deal with that and that is not a complaint, it is just a statement of fact.”

The Fitzpatrick family argues these vulnerable seniors should be prioritized for the vaccine, adding there are many physicians and nurses volunteering to administer the shots.