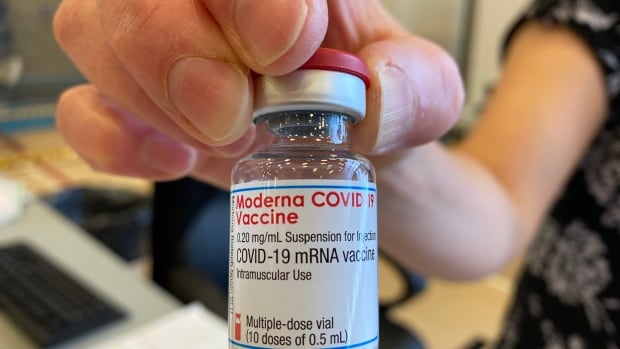 Some health experts are urging Ontario adults booking their second COVID-19 vaccine to consider the Pfizer-BioNTech and Moderna shots interchangeable, as more people in the province become eligible for an earlier follow-up injection this week.

As of 8 a.m. this morning, those who received their first dose of an mRNA vaccine on or before May 9 can book or reschedule their second dose at a shortened interval.

People in Delta variant hot spots who received first shots on or before May 30 can move up their second shots on Wednesday.

Toronto announced on the weekend it would scale up doses of the Moderna shot to offset a delay in the delivery of Pfizer doses to Ontario.

The province says this week’s shipment of Pfizer is behind by two to three days, but more than a million doses of Moderna arrived on Friday, so those will be used to supplement the delayed shots.

The government says residents over 18 who received the Moderna or Pfizer shot for their first dose can safely take either of the two vaccines for their second shot for strong protection. However, the Pfizer vaccine is currently the only one approved in Canada for use on youth, so those under 18 must stick with it for their second dose.

Since the announcement, several epidemiologists, family doctors and other health experts have urged Ontarians to get whichever of the two shots they’re offered as their second dose, saying the Pfizer and Moderna vaccines — both of the mRNA type — work essentially in the same way.

The province also said that starting sometime next week, it plans to allow all adults who received a first dose of Pfizer-BioNTech or Moderna’s product to book a second appointment as soon as 28 days after their initial shot.

As of last week, the province allowed people who received a first shot of the Oxford-AstraZeneca vaccine to book their second shot earlier.

They must wait at least eight weeks before getting their second dose.