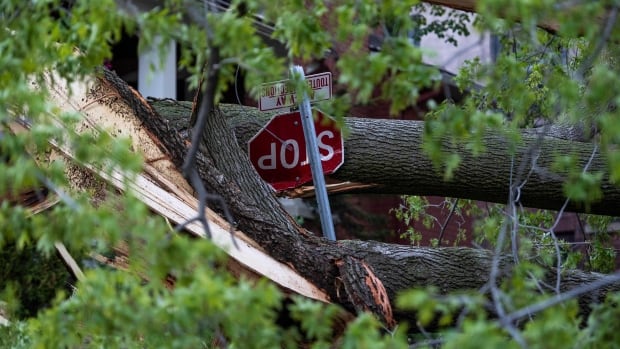 The death toll related to the powerful storm that swept Ontario and Quebec on Saturday has reached 10.

At least nine people in Ontario and one in Quebec have died either as a direct result of the storm or due to its aftermath, with most victims being killed by falling trees.

The latest victim was confirmed Monday by Peterborough Police, who say a 61-year-old Lakefield man died during the storm from a falling tree.

Police reports on the various deaths suggest victims were doing everything from camping to playing golf to taking weekend strolls when they were killed.

The storm tore across southern Ontario and Quebec in a matter of hours, breaking hydro poles and toppling towers, uprooting trees and ripping shingles and siding off houses.

Hydro utilities say hundreds of thousands are still without power and warn that it could take days to fully restore service because of the extent of the damage.