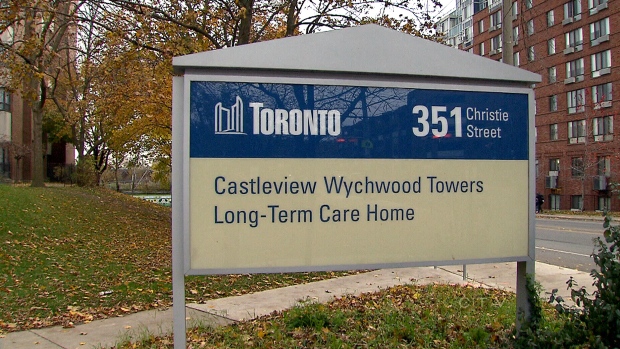 TORONTO — The City of Toronto has confirmed that an employee working at a city-operated long-term care home has tested positive for a COVID-19 variant.

In a news release issued Thursday, the city said that the employee at Castleview Wychwood Towers (CWT), located just north of Dupont and Christie streets, does not have direct contact with residents and last worked at the facility on Feb. 2.

“In an abundance of caution, Toronto Public Health (TPH) is providing direction and supporting the Seniors Services and Long-Term Care (SSLTC) division,” the news release reads.

The city said that while no residents, other staff or essential caregivers at the home are showing symptoms, they are advising the public of the confirmed case in the interest of transparency.

All residents and staff members who could have potentially been exposed were tested yesterday, the city said. The results of those tests were not disclosed.

It’s unclear if the COVID-19 variant detected in the employee is of the U.K. or South African strain, of which there are both confirmed cases in Ontario.

Public health experts believe, based on the information currently available, that known variants of the novel coronavirus are believed to be more transmissible. In the case of the U.K. variant, it’s also more deadly.

Roughly 75 per cent of staff members have also been vaccinated, the city said.

As has been the case for months, long-term care workers in Ontario are only permitted to work in one location to prevent the spread of infection.

Those workers are also cohorted and must complete online and in-person screening and must participate in mandatory weekly testing.

It should be noted that on Feb. 5 Toronto Public Health announced that they were investigating a COVID-19 case that “screened positive for a variant of concern mutation” at Elm Grove Living Centre, a privately-run long-term care home in the city’s west end.

However, they said at the time that Public Health Ontario’s laboratory is conducting further tests to determine if the case is in fact a variant of concern.