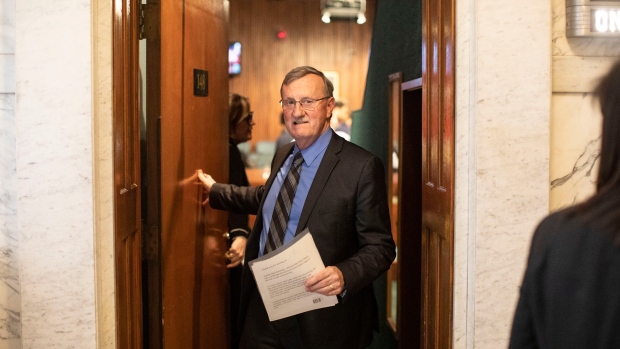 TORONTO — Super-contagious strains of COVID-19 could lead to another uptick in case numbers by the end of the month despite the recent significant drop in infections, new modelling data released by the Ontario government shows.

The new data comes as the Ontario government gradually begins to move parts of the province back into its colour-coded framework in order to reopen parts of the economy that have been shuttered since December.

Experts presenting the modelling data on Thursday revealed that public health measures, including the stay-at-home order, have helped to decline mobility, deaths, cases, positivity rates and hospitalizations in Ontario.

Despite the development, the experts warned that the B.1.1.7 variant, also known as the U.K. strain, which is believed to be at least 50 per cent more contagious than other strains, is continuing to spread across the province and could potentially lead to a third wave of the pandemic.

“If the B.1.1.7 variant grows in Ontario like it did in the United Kingdom, cases will start to grow here again in late February and March … unless we can limit the spread through public health measures,” Dr. Adalsteinn Brown, the co-chair of Ontario’s COVID-19 science advisory table, said during the modelling update.

The experts said that COVID-19 variants likely make up between five to 10 per cent of cases in Ontario currently despite the province’s restrictions.

Officials have confirmed at least 236 cases of the B.1.1.7. variant and three cases of the B.1.351, also known as the South African variant in Ontario. The province’s first known case of the coronavirus variant initially detected in Brazil was also reported in Toronto this past weekend.

Experts stressed that if public health measures are lifted, including the stay-at-home order, cases of the variants could rise dramatically if the disease continues to spread at the current rate of growth.

The most likely scenario, which is the middle-case one, according to Brown, is that the province will see between 5,000 to 6,000 cases of the variant per day by the end of March.

“There will be little time to react quickly because of how fast the variants spread. We are operating with uncertainty. That is the nature of a new disease with new variants. We need to do as much as we can reduce that uncertainty.”

The experts said that aggressive vaccination and sticking with the stay-at-home order will help avoid a third wave of the disease and a third lockdown.

The modelling also warns that admissions to intensive care units will begin to rise again during the second week of March and could surpass 650 by the end of that month in the worst-case scenario.

Brown said that ICU numbers won’t be impacted significantly by the widespread vaccination of long-term care residents because most admissions into intensive care involve people from the wider community.

Ontario’s Chief Medical Officer of Health Dr. David Williams told reporters on Thursday that the province’s decision to return to its colour-coded framework does not mean it’s reopening.

“While we’re going back into the framework, this is not an opening up,” Williams stressed.

“With the variants of concern … while we can open up some aspects within the framework, we can’t open up at large. The doors are not thrown wide open.”