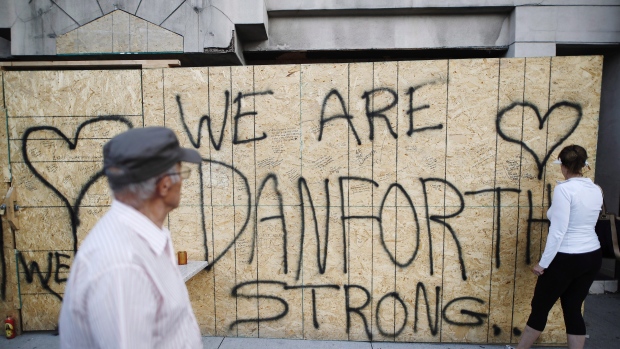 TORONTO — Ken Price’s daughter Samantha was among the people injured during the deadly mass shooting on Danforth Avenue in 2018.

“It’s something you never get over, that’s for sure,” he said, speaking to CTV News Toronto on Friday.

Faisal Hussain took the lives of 10-year-old Julianna Kozis and 18-year-old Reese Fallon and injured 13 others on the night of July 22 in the city’s bustling Greektown while armed with a stolen Smith & Wesson M&P40, a .40 calibre semi-automatic pistol. Hussain became involved in a shootout with police and took his own life.

And now, a proposed class-action lawsuit by Price and the victims of the attack against the manufacturer of that gun has passed its first legal hurdle.

In a written decision, an Ontario Superior Court judge threw out a motion by Smith & Wesson to dismiss the case.

“The foundation of her [Samantha Price] case is that Smith & Wesson, as the manufacturer of an article intended for use as weapon, owed a duty to her as person who could be harmed by that weapon to take care that the weapon had authorized user technology, that it neglected such duty and is consequently liable for the damage caused by such neglect,” wrote Justice Paul Perell.

The suit alleges that the American gun manufacturer was negligent because the design of the handgun did not utilize the aforementioned available technology that would have made it unusable by an unauthorized user.

What follows now is a lengthy legal process, according to criminal defence lawyer Ari Goldkind.

“So they’re now onto the certification process,” he said in an email to CTV News Toronto.

“Within 90 days, Price et al. need to show a cause of action, an identifiable class that can be represented by Price et al.”

“Better to have one class than multiple lawsuits all over the place, and Price can be the representative of them all for example. Affidavits must be sworn by Price, And then set out a roadmap about where/how things will proceed if you’re given the green light,” he said.

And while Price acknowledges that the road ahead will be a long one, he and others listed in the lawsuit are willing to see it through.

“Nothing will bring back our girls, nor erase the injury and memories of that horrible night,” Price wrote in a statement issued Friday.

“As representative plaintiffs, we are pleased to see our courts agree that Smith & Wesson should be made to answer for the absence of safety features, which the company itself, had been developing, to control the unauthorized use of a widely marketed and lethal product,”

According to the latest data available, the RCMP says that there were 3,486 guns stolen between 2013 and 2017.

And since 2005, at least 588 more were stolen from public agencies, including Canadian police.

With files from Jon Woodward