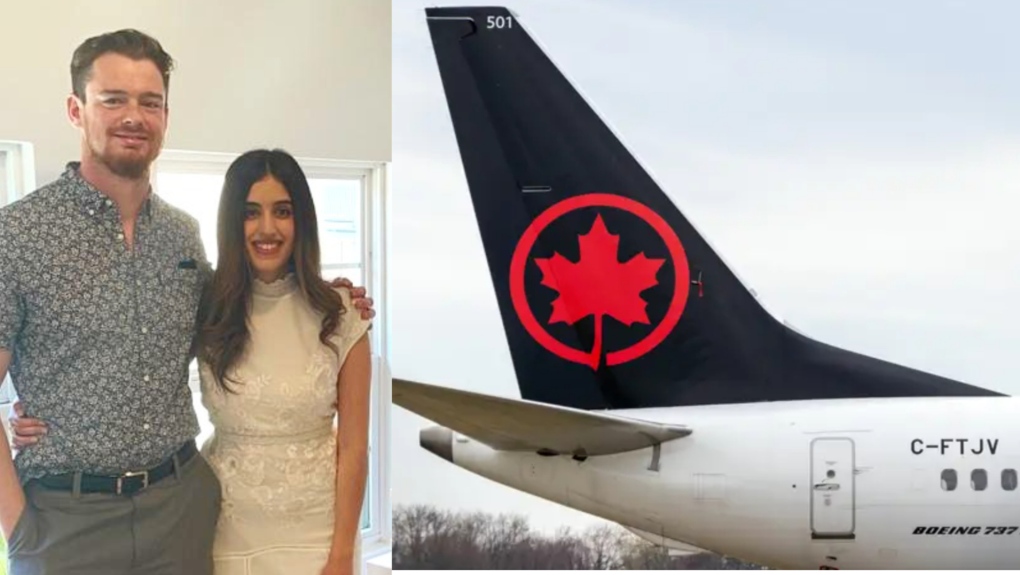 Multiple travellers who were on board an Air Canada plane scheduled to depart from Toronto on Friday say the flight was delayed for hours before it was cancelled and rebooked the following day with no food vouchers or hotel accommodations offered by the airline.

Dorar Abuzaid, one of the passengers, said she was late for her wedding in Phoenix on Saturday.

“It was a 24-hour ordeal for a four-hour flight,” Abuzaid told CTV News Toronto.

On Friday, she said she boarded the flight and sat on the tarmac for three hours before the flight was cancelled.

Abuzaid said after she boarded the plane, a member of the crew announced that one of the flight attendants was experiencing a medical emergency.

She said after paramedics assessed the flight attendant and deemed them safe to fly, the pilot announced that Air Canada management had made an executive decision that it was still unsafe.

Originally, their flight was scheduled to depart at 8 p.m. But at that point, it was too late to have a new flight attendant clear customs and the flight was cancelled, Abuzaid said.

“It got exponentially worse after this,” she said. “No food vouchers, no hotel, nothing. We ended up sleeping in the airport.”

An Air Canada spokesperson confirmed to CTV News Toronto the flight was delayed 2 hours and 15 minutes before it was cancelled due to a medical issue with a crew member and that all customers were rebooked and departed the following morning at 11:32 a.m.

However, the airline spokesperson did not address why food vouchers and hotel bookings were not offered by the airline.

According to Air Canada regulations, the airline will provide food and drink in reasonable quantities to passengers who have been informed of a delay or cancellation less than 12 hours before their departure and have waited for two hours after their departure time.

The guidelines state the airline should also provide hotel or comparable accommodations for overnight delays for out-of-town passengers, subject to availability.

Another passenger, Lara Forchuk, told CTV News Toronto the airline said passengers would have to book and pay for hotels on their own, but that they would be reimbursed if they found accommodations.

Abuzaid said that when she finally arrived in Phoenix for her wedding, 14 hours after she was supposed to, she was sleep-deprived. “I’m the bride and I was the last one to arrive in Arizona,” Abuzaid said.

“We were passing out at the dinner table,” she added.

Samantha, who asked for her surname to be omitted, told CTV News Toronto she was also aiming to arrive in Arizona in a timely manner for her cousin’s bachelorette party in Scottsdale.

“I still haven’t heard a single word from Air Canada,” she said. “It was almost a 24-hour ordeal with no communication from the airline.”

As a Toronto resident, Samantha said she was lucky to at least sleep at home after the flight was cancelled, but even so, the experience was “painful.”

Forchuk said she slept on an airport chair while waiting for the rebooked flight on Saturday morning.

The Glendale resident was flying home to Arizona after visiting her parents in Brantford, Ont. Like Abuzaid, she said there were no food vouchers offered or hotel accommodations booked by the airline.

“It was cancelled with absolutely no explanation,” she said.