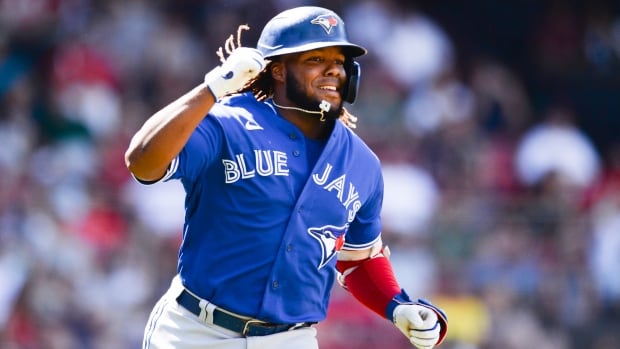 Teoscar Hernandez belted a pair of three-run homers over the Green Monster — two of Toronto’s eight longballs — and Marcus Semien extended his road hitting streak to 26 games as the Blue Jays pounded the Boston Red Sox 18-4 on Sunday.

“It’s unbelievable,” Hernandez said. “I’m hoping it can be like that every day so we can have fun and laugh the whole game.”

Bichette had four of Toronto’s season-high 20 hits, and Guerrero, Hernandez and Gurriel each had three. The Jays also reached a season high for runs.

“Honestly, I don’t know,” winning pitcher Robbie Ray said, when asked what he’d do if he was facing Toronto’s lineup. “Maybe try to make them hit the ball right at somebody. The way that we were swinging it today was really impressive.”

Semien’s club-record streak is the majors’ longest since Dexter Fowler hit safely in 27 straight road games for the Cubs from September 2015 to May 2016.

Toronto hit five homers in two straight games for the third time in team history, also in 2020 and 2017.

The Blue Jays grabbed a 4-0 lead in the first against Martin Perez on Hernandez’s three-run homer and a solo shot from Gurriel.

Semien’s drive into the batters’ eye in center made it 5-0 in the second, prompting loud boos from the Fenway Park crowd. Those quickly turned to mock cheers when Red Sox manager Alex Cora came out to pull Perez after the next batter, Bichette, singled.

“We need to do a better job, that’s the bottom line,” Cora said. “It’s been a horrible week for us pitching-wise.”

The Red Sox have given up 53 runs in their last six games.

“I’m not locating the ball where I want to,” he said. “The last two they have been hitting good against me, that’s part of the game.”

Toronto broke it open with four runs in the fourth and four more in the fifth, making it 13-1. Hernandez hit his second three-run shot, a drive estimated at 440 feet that left Fenway in the fourth, after Guerrero’s RBI single.

In the fifth, Bichette’s three-run shot also left the park.

In the last two games, Toronto has hit nine homers over the fabled left-field wall.

“It’s really fun, when you hit a fly ball that’s a regular fly ball in other parks, here it [can be] a base hit, maybe a double,” Hernandez said. “Some fly balls that don’t go for base hits in other parks are a single. I like to play here.”

RHP Ryan Weber, recalled from Triple-A Worcester before the game, went 5 2/3 innings, allowing 11 runs on 11 hits and striking out seven.

Boston utility player Marwin Gonzalez worked a perfect eighth, bringing cheers from the crowd with most of his pitches in the mid-40s mph range.

Blue Jays: Placed Saturday’s winning pitcher, Steven Matz, on the COVID-19-related injured list. “He’s still going through additional testing,” manager Charlie Montoyo said. “The guys that were around him that are vaccinated came back negative, and that’s good news.”

Red Sox: Bogaerts was in the lineup after missing the last two games with a sore left knee. … 3B Rafael Devers got the day off, with 1B Dalbec moving across the diamond.