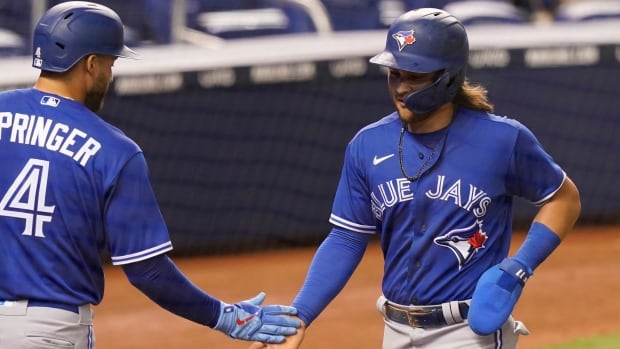 The Toronto Blue Jays’ bats came alive as soon as they had a chance to face someone other than Sandy Alcantara.

The hits came with one out. Garcia (3-6) entered the game after Alcantara stymied the Blue Jays while throwing only 86 pitches in eight innings before departing for a pinch-hitter.

“He was really good,” said Blue Jays coach John Schneider, who ran the team while manager Charlie Montoyo served a one-game suspension. “Seeing what our hitters were saying, we were happy to get him out of there, obviously. He was on tonight. It worked out for us.”

With the score 1-all, Marlins manager Don Mattingly said, the decision to pinch-hit for Alcantara was easy. His replacement, Sandy Leon, struck out.

Toronto’s Ross Stripling allowed one run in six innings. Tim Mayza (2-1) pitched a perfect eighth, and Jordan Romano faced only three batters in the ninth for his fourth save to complete a three-hitter.

Starling Marte led off Miami’s ninth with an infield single but was thrown out trying to steal.

“He’s definitely got the green light there,” Mattingly said. “The math works, but it didn’t look like he had a great jump.”

Toronto outfielder George Springer went 0 for 4 in his return to the lineup. He was activated after missing 66 of the first 70 games because of a strained right quadriceps.

“Alcantara pitched his tail off, and our lineup didn’t show off like they usually do,” Stripling said. “But our lineup is special, and now we’re going to throw George Springer in it for the next 90-plus games. It’s going to be a lot of fun to see him in there.”

The Blue Jays scratched out a run in the sixth. Bo Bichette was hit by a pitch, stole second, took third on a wild pitch and came home on an opposite-field single by Guerrero.

Toronto improved to 12-2 in interleague games, including 3-0 against Miami. The Marlins fell to 5-13 in one-run games, while Toronto is 6-9.

Both starting pitchers passed inspections by the umpires between innings as part of MLB’s crackdown on sticky substances.

“They kept it lighthearted and quick and easy,” Stripling said. “We started to get a feel for what it looks like. I’ve made adjustments; it’s not a big change. I’m not worried about it moving forward.”