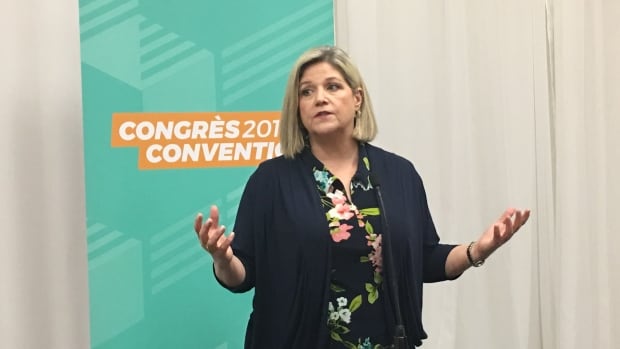 The leader of Ontario’s NDP says the provincial and federal governments need to act to keep Thunder Bay’s Bombardier plant running as layoffs for nearly half of the facility’s workforce loom.

The company announced July 10 that it plans to lay off 550 workers at the Thunder Bay plant this fall. During a visit to the northwestern Ontario city on Friday, Andrea Horwath called on the provincial and federal governments to step in.

“Instead of building Thunder Bay’s economy and supporting quality jobs like these, [Ontario Premier] Doug Ford decided to rip up existing transit plans; he decided to put jobs on the line in doing so, in Thunder Bay, and delayed transit building down in Toronto by years,” Horwath said during her news conference.

“Meanwhile, the federal Liberal government has decided that instead of pushing to get shovels in the ground, they’re also going to waste valuable time playing a political blame game,” she said. “Both Doug Ford and [Canadian Prime Minister] Justin Trudeau need a reality check: these are real people, real people whose jobs are on the line, whose livelihoods are on the line.”

Horwath called on Ford to speak to Metrolinx and the Toronto Transit Commission, and urge them to order more train cars, which would be built in Thunder Bay.

“People are tired of finger-pointing, and the jurisdictional ping-pong that continues to prevent these solutions from being implemented,” Horwath said. “They want their governments to step up, and actually take action to make their lives better.”

“I’m calling on this provincial government, and Doug Ford, to step in and step up.”

Horwath said Attawapiskat Chief Ignace Gull told her nobody from the province has contacted the community since Attawapiskat declared a state of emergency over its drinking water earlier this month.

“These folks are Ontarians,” Horwath said. “Ontario can, and must, fix the water now, and then send the bill to Ottawa.”

Police lay murder charge in connection with May 2019 death of man, 42, in Onigaming