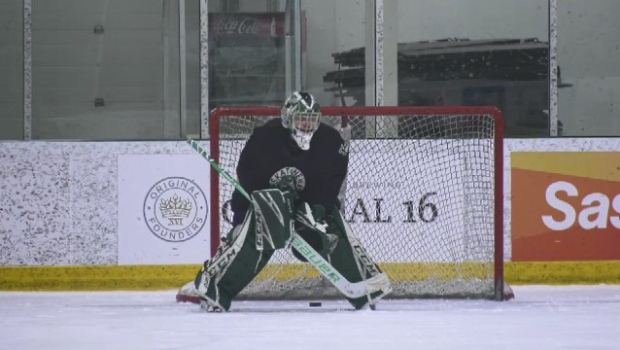 SASKATOON — There’s a lot to like about the Huskies men’s hockey team as they prepare for a playoff battle with Calgary. One key component all season has been the stellar goaltending of Taran Kozun

“We just have to make sure our compete level is on the ultimate high this week,” Kozun says.

The third-year goaltender leads the Canada-West conference in wins, goals against average, save percentage and shutouts.

“He’s the best goalie in the league by far,” says team captain Tanner Lischynsky. “He makes you want to work harder for him too, because you know he’s giving his all and he’s going to be the best every night.”

Kozun even proved he has a good shot, becoming the first-ever Huskies goalie to score a goal, when he lit the lamp against Calgary in January. Even the NHL took notice, re-tweeting video of the goal.

Kozun says he was surprised with the amount of attention it received.

“I didn’t think it was going to get there and get that much notice. But, I suppose, goalie goals don’t happen all that often.”

The Huskies enter the playoffs riding an 11-game win streak, with both veterans and younger players have been carrying the load. Rookie Jared Dmytriw leads the team in points.

“Coming in here, it’s been a great group of guys,” Dmytriw explained. “We’ve got a great coaching staff and great facilities. School has been an easy transition. So, on the ice, it’s all just kind of worked out and come together.”

This weekend the Huskies face the Calgary Dinos in a best-of-three playoff series. The Dinos handed Saskatchewan one of only six Huskie losses this season.

“We’ll prepare as hard this week as we prepared two weeks ago against the University of Regina,” the coach explained. “Our league is a very good league, we respect our opponents and we’re scared to lose.”

A series win would put the huskies in the Canada-West finals.