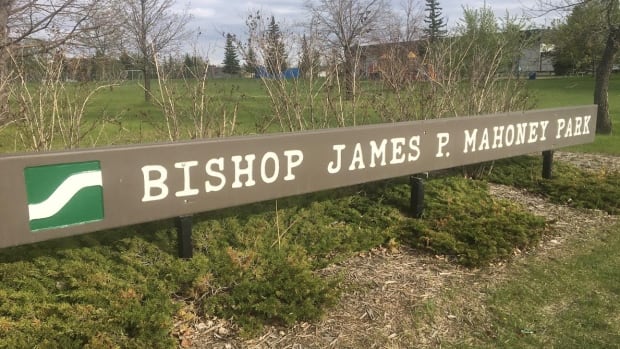 Nelson Chen said his 15-year-old son was subjected to racial slurs and COVID-19-related accusations, then physically attacked while riding his bike in a field behind Bishop James Mahoney High School.

Chen said the incident happened Friday between 2-2:30 p.m. when his son decided to go for a bike ride with a friend.

Chen said his son was going through the field by Bishop James Mahoney when he encountered a man.

“My son just was minding his business, just keeping on riding,” Chen said. “But this person started to curse and then yelled racial slurs to him and accused him of spreading the virus.”

He said his son used his phone to take a picture of the man.

“That person became even more aggressive. And he just ran to my son and push him off the bike and pitch him on the ground and start punching him in the head.”

As the person was approaching, his son was able to record a portion of the attack.

Chen said most of the blows hit the boy’s helmet and he was able to get away physically uninjured.

The boy came home in shock.

“He was shaking and he was …. just telling us that, ‘I’m attacked, I’m attacked.’

“It took a little bit of effort for us to really figure out what exactly happened to him,” Chen said.

At that point Chen called the police who sent a patrol car to their house.

“I believe we talked to one of them and the other one was trying to catch the attacker.”

Saskatoon Police said they are aware of the incident but are not releasing any details at this time.

Chen decided to post the incident and video his son made on Facebook and has had an overwhelming response, including potential information about the attacker which they shared with police Saturday afternoon.

Chen said the family is shocked by the attack.

“I have been in Canada for 30 years and I spend all my 30 years here in Saskatoon and this never ever happened before or anything that was close to that ever happened to us,” he said. “For us it is just very, very shocking. And the weird thing is that this happened right in our neighborhood. We never thought that just going for a bike ride would be so unsafe.

“We’re just….you know, we are very, very shocked. We’re sad and we’re very angry about it.”

Chen said they will be more careful in letting their kids out by themselves.

While the attack has been a distressing, Chen said the response from the public has been “absolutely incredible.”

“We received a lot of messages from all our friends, our neighbors, our other friends, our colleagues and people that we knew from the past but had lost connection with,” he said.

“We got messages from total strangers and everyone was very supportive, very caring. We were just overwhelmed and very touched by all of the responses that we got on Facebook.”

Chen said he’s aware such incidents are happening but they were always somewhere else.

“We heard  [reports of racism toward Asians] on the news and we heard it happen in other places, but we just couldn’t couldn’t imagine that it happened right in our backyard,” he said.

“So it is shocking. But the support that we received from from people in Saskatoon was just very, very positive.”