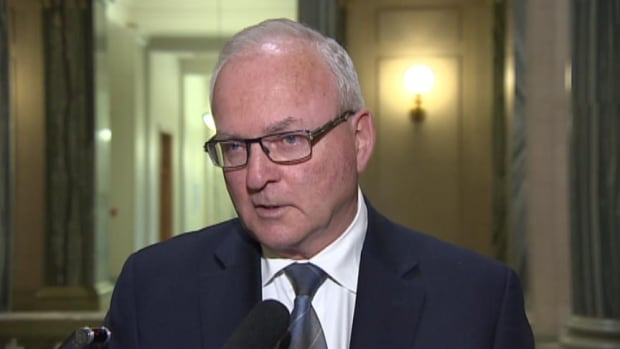 One of the Saskatchewan Party’s longest serving members is set to seek re-election — after his second battle with cancer.

While Lyle Stewart said he doesn’t have the medical proof just yet, he’s feeling better than he has in years after battling cancer for a second time. Stewart will seek re-election in the Lumsden-Morse riding in the coming provincial election.

“I feel really good, better than I have in a couple of years I’d say, and I’m ready to get back in the saddle,” Stewart said.

He wanted to make a decision whether or not he would be seeking re-election as soon as possible.

Stewart was first elected in 1999 and spent time as the Sask. Party’s interim leader prior to the election of Brad Wall.

Stewart stepped down from his role as Minister of Agriculture last August to battle colon cancer. He was previously diagnosed with prostate cancer in 2014.

He said this battle with cancer was different — and tougher than his previous bout with the disease.

“It was a rough fight, I’m not going to lie to you. It was tough,” Stewart said.

Stewart said in 2014 he had a different kind of treatment, that was more focused and included powerful radiation, whereas he had a more complex surgery that took awhile for him to bounce back from in his most recent fight.

Stewart said he enjoys the work he did as a politician and looks forward to getting back to serving the people of Saskatchewan should he be re-elected.

“It’s interesting and I’ve always enjoyed it,” Stewart said of the job. “I really like what’s going on in my own party right now and I’d just like to be part of it for another four years.”