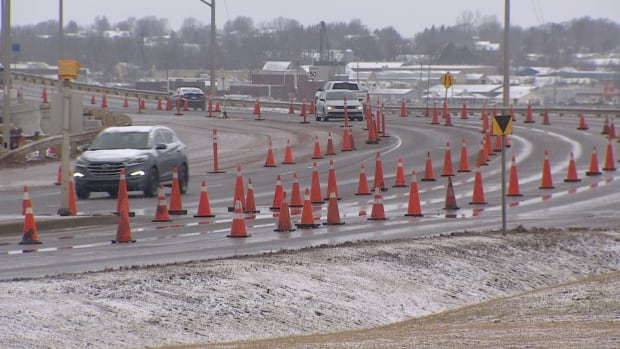 Traffic flow should be back to normal for commuters Thursday on the Hillsborough Bridge between Stratford and Charlottetown, with two lanes of traffic each way.

Work on the bridge has been ongoing since mid-October.

Hundreds of orange pylons were used to direct traffic reduced to three lanes from four, as crews installed pipes along the causeway and beneath the bridge to link the sewage handling system in Stratford to the one in Charlottetown.

Transportation crews plan on removing the pylons from the bridge by end of day Wednesday, a transportation spokesperson said in a written release.

“Drivers are reminded that the bridge will be a construction zone throughout the winter, although there will be minimal impacts on traffic until the next phase of construction this spring,” the release said.

“Slow down and follow the directions of traffic-control personnel and signs.”