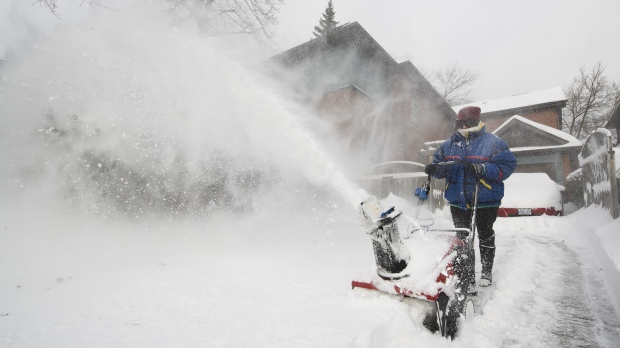 OTTAWA — A “significant” winter storm expected to roll across the Ottawa Valley will bring uo to 20 centimetres of snow to Arnprior, Renfrew, Pembroke and Petawawa this week.

A revised weather statement for the area, issued Monday, reduced the snowfall totals to 10 to 20 cm, from the 20 to 30 cm that were predicted on Sunday.

“There could be some snow for Ottawa Tuesday night into Wednesday, but it wouldn’t be very much at all,” said Brian Owsiak, Environment Canada severe weather meteorologist.

CTVNewsOttawa.ca asked Environment Canada why the Ottawa Valley could see so much snow, while Ottawa is expecting mostly rain.

“We do have a strengthening area of low pressure; it’s going to be moving up from the southern United States. We are expecting mixed precipitation – it’s going to be mostly rain for extreme eastern Ontario, including Ottawa,” said Owsiak, in an interview with CTVNewsOttawa.ca on Sunday afternoon.

“However if you go to the west and northwest, it is going to be mostly snow with this system. That’s going to start kind of Monday, and then continue for quite awhile into probably early Wednesday, just given the slow moving nature of the system.”

Oswiak says the reasons Ottawa will not see significant snowfall this week are due to cooler temperatures the further northwest you go and the track of the storm through the region.

No weather advisory is in place for the City of Ottawa at present. Owsiak says Ottawa could see 10 to 20 millimetres of rain by the time the system moves out of the region.