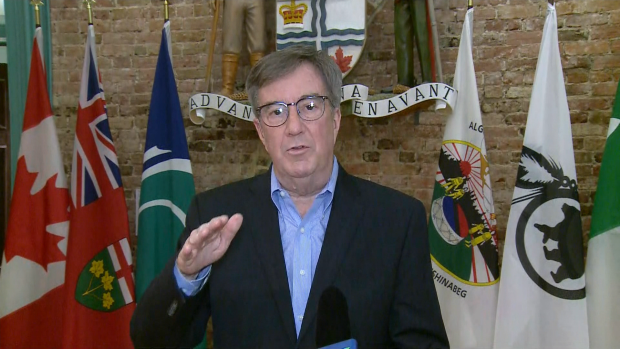 OTTAWA — Ottawa Mayor Jim Watson is breaking with the provincial government, saying he was “blindsided” by the decision to include Ottawa in a 28-day provincewide lockdown starting Boxing Day.

In a press conference Monday afternoon, Watson said he heard that Ottawa would be included in the 28-day shutdown for southern Ontario through media reports Sunday night.

“Today’s provincial announcement has completely blindsided Ottawa residents and small businesses who have diligently followed the rules. The province sets the rules, we follow them, and then they move the goalposts. We follow the new rules and then they change them again,” Watson said in his opening remarks.

The province announced Monday a strict 28-day lockdown for southern and eastern parts of the province, including Ottawa, would begin at 12:01 a.m. Dec. 26. A 14-day shutdown will be put in place for northern regions.

The mayor said the lockdown would likely have a devastating impact on the local economy and he added that Ottawa Public Health informed the province last week that a lockdown in our region was not necessary.

“Dr. (Vera) Etches has always supported a balanced approach to controlling COVID-19 in our community and she believes that we are still on that balanced path in Ottawa,” he said. “As we face this provincial decision today, there are simply no facts to support a lockdown in the city of Ottawa. It is not based on our numbers or on the professional advice from OPH to the province’s chief medical officer of health.”

Watson wants Ottawa to be placed in the same category as health regions in northern Ontario.

“Northern Ontario is getting off the hook with a 14-day lockdown, which creates a double standard across the province,” he said.

Ottawa’s medical officer of health, Dr. Vera Etches, said she spoke with Chief Medical Officer of Health Dr. David Williams last Friday, but said at the time the lockdown was a “possibility” and she was unsure what the final decision would be.

She stressed that the COVID-19 situation in Ontario is serious.

“It is clear that stricter measures are needed to control COVID-19 transmissions in many parts of our province,” she said. “In my discussions with Dr. Williams, I highlighted the incredibly hard work and significant sacrifices that Ottawa residents and businesses have made over the last several months to keep COVID transmissions down.”

Dr. Etches said the decision to impose a 28-day shut down on Ottawa is disappointing.

“I’ve asked the provincial government to consider a two-week shutdown for Ottawa, one that would be as short as possible in consideration of the evidence of the COVID indicators in our community,” she said.

Ottawa’s COVID-19 figures in the city have been steady through December. The most recent update from OPH shows a seven-day average of new cases of 27 per 100,000 residents, a positivity rate of 1.4 per cent, and a reproduction rate that has hovered steadily around 1 for the month.

However, while the numbers are not increasing, Dr. Etches noted that they are not rapidly declining either.

She said that while she does not support a four-week lockdown, she is hopeful it would help reduce the number of infections in Ottawa.

“The public health measures that are being put in place are not a punishment; they’re to control COVID-19 transmission. The lower we can bring the level of COVID in our communities across the province, the better we can avoid hospitalizations and deaths,” she said. “Hopefully people understand this is a temporary measure. If our numbers continue to be positive, we’ll be able to go back to a balanced approach.”

Hospitalizations in Ottawa have been on the decline in December and, as of Monday, there have been zero COVID-19 patients in intensive care for three straight days.

No evidence Quebecers are coming to Ottawa ‘in droves’

One of the justifications Ontario Premier Doug Ford gave for including Ottawa in the 28-day lockdown is that Quebec residents are being locked down over the holidays and he feared Quebecers would travel to Ottawa “in droves” if the region remained open.

“We’ve seen it before. When we open up and Quebec closes down, guess what happens. We have the Quebecers—nothing against Quebecers, I love the Quebecers—but they’ll come over here in droves. Numbers will be driven back up,” Ford said at Queen’s Park Monday.

Watson said he doesn’t believe that is the case.

“To the best of my knowledge, we don’t have any hard evidence at all as to whether there’s a spike of people coming over from Quebec to the Ottawa side or vice-versa,” he said.

In April, Quebec put police checkpoints in place on the bridges between Ottawa and Gatineau. When asked whether Ontario should do the same during this lockdown, Watson said he doesn’t want local police doing it.

“I found, when Quebec did that, it was pretty ineffective, to be perfectly honest, and I don’t know how effective it would be going the other way from Gatineau to Ottawa,” Watson said. “I certainly don’t believe we should be have city police officers doing that kind of border patrol but, if the province feels that that’s one of the driving forces to COVID, then they should take that initiative. They have their own police force and, frankly, they have the jurisdiction more than I would, from a constitutional point of view, to let people in and out of the province. The ball is in their court. If they feel that is the problem, they should act on it.”