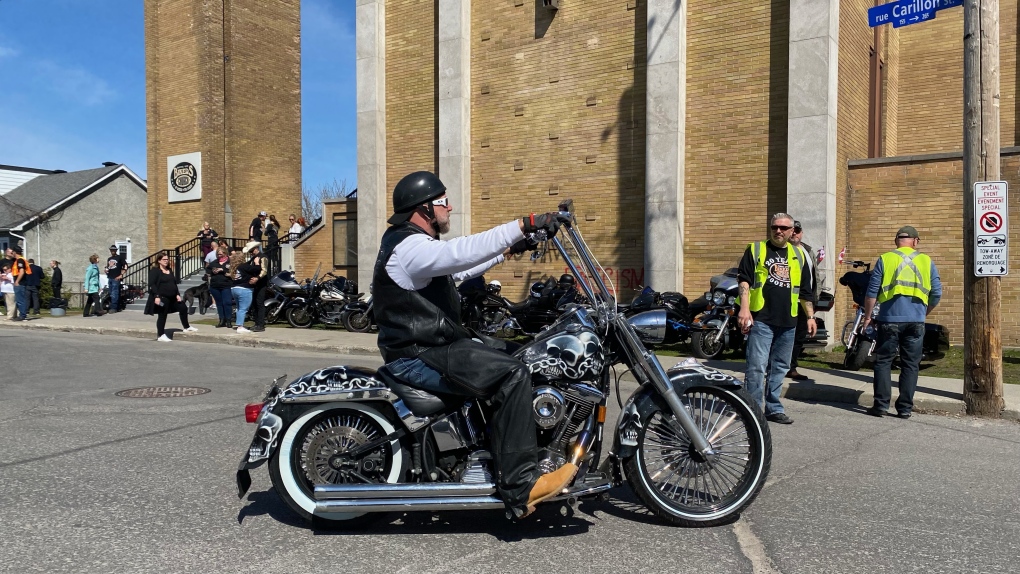 Hundreds of people packed a church in Ottawa’s Vanier neighbourhood for a “bikers’ church service”, the final scheduled event of the “Rolling Thunder Ottawa” biker event this weekend.

Police officers kept an eye on worshippers and supporters of the “Rolling Thunder” event outside the Capital City Bikers’ Church on Carillon Street Sunday morning. The service was held just hours after Ottawa police launched a “hate-motivated mischief” investigation into graffiti spray-painted on the church’s walls.

“We are excited you are joining us today,” Pastor Rob McKee told worshippers at the start of the service.

McKee said the church was full for the Sunday service, with an overflow crowd outside watching a livestream. A band performed for the crowd before and after the hour-long service.

The bikers’ church service was the final event on the schedule for the weekend, with the “Rolling Thunder Ottawa” website saying on Sunday, “See you next time!”

Ten people have been arrested during the three-day event in downtown Ottawa, including seven on Friday night when protesters blocked the intersection of Rideau Street and Sussex Drive.

There have been no reports of injuries or property damage in the downtown core.

Many participants have said they were planning to leave the city after the church service.

“The situation this weekend was significantly better for our residents and our small businesses than, obviously, the truck convoy back in February, but it still was disruptive,” Mayor Jim Watson told CTV News Ottawa Sunday afternoon.

“It disrupted people coming and going to restaurants, businesses on certain streets but I believe the police did an excellent job of containing the situation.”

Watson praised the “no-nonsense approach” taken by police and bylaw with exclusion zones and closing highway off-ramps for controlling the situation this weekend.

Interim Chief Steve Bell said police continued to gather information and intelligence around the plans for the weekend.

“What I can tell you is our operation isn’t completed, we will continue to be in and around the area … the remainder of the weekend,” Bell told CTV News Ottawa Saturday night.

“Like last time, we’re going to say that our operation won’t be done until everyone has left from our area.”

‘Controlled access’ points remain in place through the downtown core today, with officers set up at many intersections around the exclusion zone. Traffic was allowed to move through the area, but no-parking and no-stopping rules remain in effect.

“A major goal of our efforts will be to support and protect the CN Cycle for CHEO,” police said in a statement Saturday evening.

Police believe the increased police presence in downtown Ottawa this weekend has stopped many people from joining the event.

“Several convoys and groups had been spotted outside of the city. Our intelligence gathering indicates that many convoys have chosen not to come to Ottawa based on the police operational posture,” police said.

On Saturday, hundreds of people gathered at the National War Memorial for a morning service, before more than 400 motorcycles travelled from Ottawa’s east end to the downtown core. There was also an afternoon rally on Parliament Hill, and a march through Centretown.

“From what we’re hearing from our community is they’re happy with our police response,” Bell said.

“They would prefer these don’t happen, but they understand that people will come to our city and they expect their police service to actually manage it, and I believe we’ve done a fairly good job in that over the weekend.”

Ten people have been arrested during the “Rolling Thunder Ottawa” event.

A male driver was also arrested after rushing an OPP motorcycle at a checkpoint in the downtown core on Saturday, according to police.

“The man, who was on conditions stemming from the February occupation, is facing several charges, including breaching release conditions, dangerous driving, refusal to provide a sample, assault on a peace officer and assault with a weapon,” police said in a statement Saturday evening.

Ottawa Bylaw and Regulatory Services says 761 tickets have been issued for violating the no-parking/no-stopping zones in the exclusion zone since Friday morning.

Thirty-nine vehicles have been towed this weekend in the area of Waller Street to Bay Street and Wellington Street to Laurier Avenue.

Ten other bylaw tickets have been issued for noise violations, smoking, public urination, encumbering the highway and misuse of accessible permit, bylaw saw.

Ottawa will send the policing bill to the federal government

The policing price tag for the ‘Freedom Convoy’ event in Ottawa in January and February was $36 million.

Mayor Jim Watson says the final bill for this protest won’t be that high, but Ottawa taxpayers still shouldn’t pay it.

“So we’re looking in the millions, not the hundreds of thousands but the millions,” Watson said Saturday evening.

“I spoke with the Public Safety Minister federally just a few days ago to let him know that we would be counting once again on the federal government to provide the funding. It shouldn’t be the Ottawa taxpayers that are funding for this kind of event that is happening in our backyard.

“I keep telling people there are two different Ottawa’s – there’s official Ottawa, Parliament Hill, but there’s the Ottawa that’s made up of communities.”

Organizers say the CN Cycle for CHEO will go ahead today.

The event is being held at the Canadian War Museum, with routes across the city.