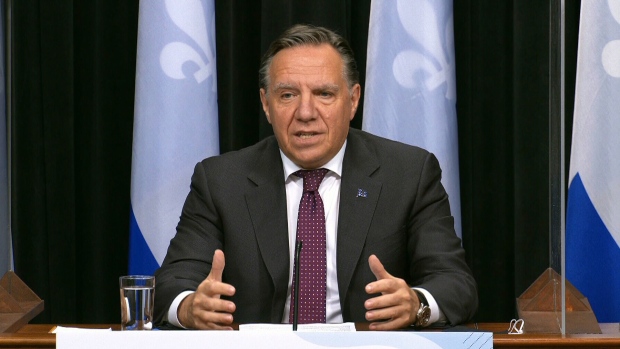 MONTREAL — The Quebec government has reversed its decision on holiday gatherings, citing a worrisome increase in cases of COVID-19 over the past few days as the reason.

Premier Francois Legault made the announcement at a news conference on Thursday alongside Health Minister Christian Dube and the province’s director of public health, Dr. Horacio Arruda.

“When we look at the situation, we are forced to realize that it is not realistic to think that we are going to succeed in reducing the progression of the virus in a satisfactory way by Christmas,” Legault said.

The only exception will be for people who live alone, the premier said. They will be allowed to receive one visitor at a time.

People who live alone are still permitted visitors. Otherwise, only those in the same household can see each other. The decision about Christmas was taken last night says Legault. @CTVMontreal

In the span of a week, Quebec beat its record for the highest single-day increase in COVID-19 cases multiple times. The current record, set on Wednesday, stands at 1,514.

“We all know we’ve had a second wave that started in September specifically and we pretty quickly reached an average of 1,000 cases per day,” Legault said. “Unfortunately, in November, we had a second increase within the second wave.”

The province initially green-lit Christmas gatherings for up to 10 people between Dec. 24 and Dec. 27, later clarifying that only two gatherings would be allowed within that time frame.

“I don’t give myself perfect marks for the management of the crisis,” Legault said on Thursday. “If we had to do things over again, I would not open the door to two days of gatherings around Christmas.”

Thursday’s announcement will not impact the plan laid out for schools leading up to the holidays; classes will still be held remotely during the last week before the break.

People living outside of red zones are permitted to gather, but Legault stressed they should also use caution — and keep gatherings small.

In yellow zones, people are still allowed to gather 10 people together. Orange zones it is 6. That still stands. @CTVMontreal

Legault said he knows the pandemic has been hard on Quebecers but that the last stretch of a marathon is the hardest part, and that it is important to remain vigilant over the next few months in order to stop the spread of the disease.

This is a developing story and will be updated.