Just moments after Hydro Ottawa provided an update on progress restoring power following the May 21 storm, thousands of customers in Stittsville and Kanata lost power.

There were 6,500 customers without power in pockets throughout Ottawa as of Monday at 8 p.m. Power has been restored to 173,500 Hydro Ottawa customers since a May 21 storm left a trail of destruction across the capital. Just a few minutes later, an outage affecting more than 8,200 customers in Stittsville and Kanata was reported on Hydro Ottawa’s outage map.

The outage in Kanata and Stittsville had an estimated restoration time of 12:30 p.m. Tuesday, though Stittsville Coun. Glen Gower had tweeted that it could be earlier. Power was restored overnight.

Hydro Ottawa CEO Bryce Conrad explained Tuesday that it took about two hours to restore power. He said a piece of infrastructure that was damaged by the storm failed.

“What we found was a piece of infrastructure that was severely damaged and compromised by the storm. We had crews working on site and saw the switch fail so we were able to effect repairs fairly quickly,” he said.

“With the bulk of the electricity grid now fully operational, we are now able to relaunch our online outage map, tailored for customers who remain without power after last week’s storm,” a statement on Hydro Ottawa’s website says. “We know that customers would like us to provide a more accurate estimate. Due to the number of individual and complex overlapping outages throughout the city, we are not able to provide exact times of restoration at this point.”

“As we get down to these remaining outages, that is the issue: trees and tree contacts on wires,” Conrad said. “We have forestry crews, we have a great deal of forestry contractors, some arrived today, some more will arrive tomorrow, and that is what they’re doing. They’re just simply going to blitz and remove those trees from the wires.” 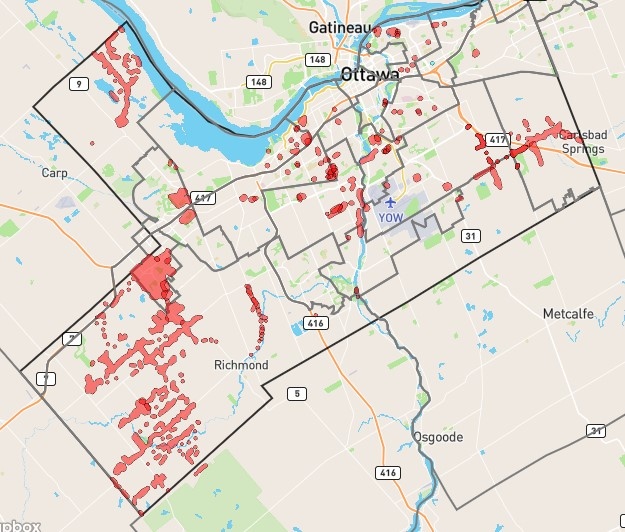 Hydro Ottawa’s outage map as of 9 p.m. May 30, 2022. It shows a large outage affecting Stittsville and parts of Kanata. (hydroottawa.com)

More than a dozen schools remain closed Monday, though only five across the city’s two English language school boards will remain closed Tuesday due to the power outages. The city of Ottawa opened “one-stop shops” for community support information.

In a memo to council Sunday evening, Conrad said that after reconnecting priority infrastructure, the priority was “flowing power to each and every circuit” in the “bulk power grid” as soon as possible.

Hydro crews from Toronto, Kingston, London and New Brunswick have been assisting Hydro Ottawa crews. Conrad said another 50 contractors joined the effort on Sunday, and more arrived on Monday.

Hydro Quebec is reporting 1,200 customers still without electricity in the Outaouais as of Monday evening. Hydro One is reporting 7,600 people without power in Eastern Ontario.

The Ottawa-Carleton District School Board says Merivale, Brookfield, and Bell high schools will remain closed Tuesday because they have no power. Students will be learning remotely. Families of children who attend Arch Street Public School can expect an update from the school Monday, as power is expected to be restored Monday evening. Castor Valley Elementary School will continue with remote learning on Tuesday, but will re-open for in person learning on Wednesday.

The Ottawa Catholic School Board says Sacred Heart and St. Monica schools remain without power. Virtual learning in the catholic board began Monday.

Schools with electricity are open as normal.