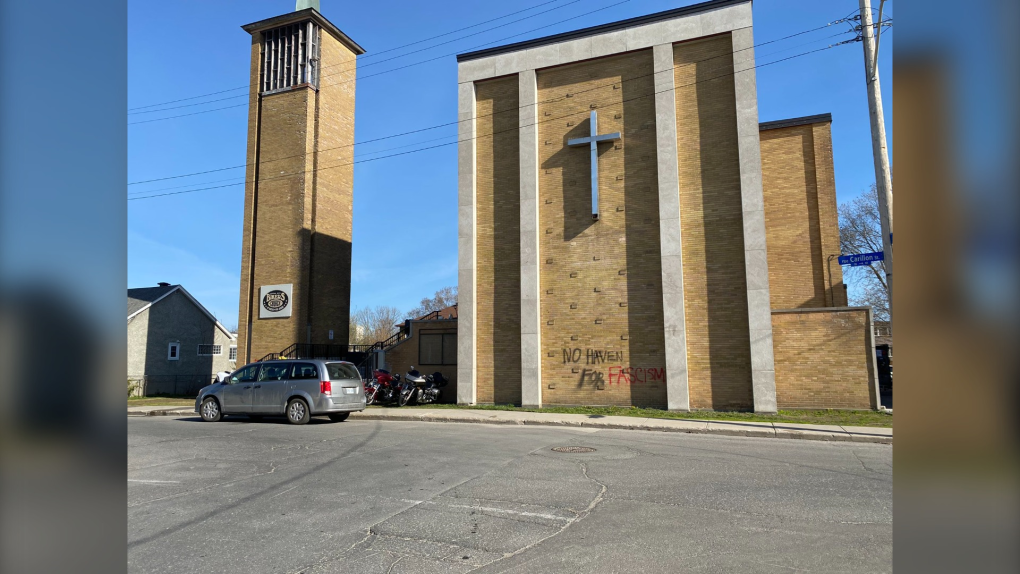 Ottawa police say they are investigating an incident of “hate-motivated Mischief” at a Vanier church, which was scheduled to hold a service today as part of the ‘Rolling Thunder’ biker rally.

Police receiving a call about the incident at the Capital City Bikers Church on Carillon Street just before 7 a.m. Sunday.

CTV News Ottawa’s Colton Praill reported thumbtacks were strewn across the ground in the church’s alley, and someone spray-painted, “No haven for fascism.”

Church members spent the morning picking the tacks off the ground. The thumbtacks were cleaned up just after 9:30 a.m.

The Ottawa Police Hate and Bias Crime Unit is investigating.

The Capital City Bikers Church was scheduled to hold a bikers church service at 10:30 a.m. on Sunday. It was the final scheduled event for the ‘Rolling Thunder Ottawa’ biker event.

The church in Ottawa’s Vanier neighbourhood, just east of the downtown core, was supportive of the ‘Freedom Convoy’ protest in Ottawa in January and February, including providing meals to participants.

On Saturday, Interim Chief Steve Bell told CTV News Ottawa there had been no reports of vandalism or property damage during the weekend event.  There are also no reports of injuries.

Ten people have been arrested so far this weekend.

Police are investigating an incident of hate-motivated Mischief at a religious institution located in the 100 block of Carillon Street that was reported to us just before 7am this morning. The Hate and Bias Crime Unit investigation is ongoing. Info? 613-236-1222 #ottawa #ottnews pic.twitter.com/GPYeCNFyd3