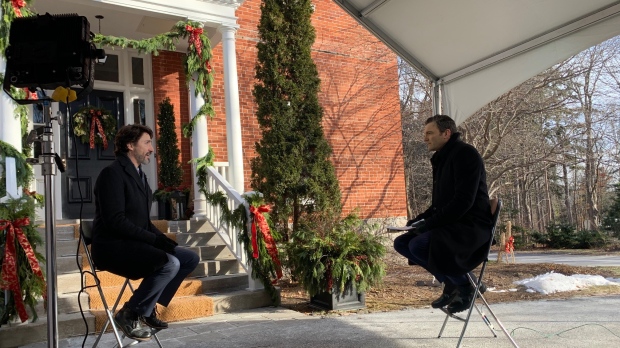 OTTAWA — Prime Minister Justin Trudeau says that “it’s possible” that Canada will be able to accelerate its timeline for vaccinating all Canadians who want to be against COVID-19.

The federal government has given the target that sometime between September and December of 2021, all Canadians who want to be vaccinated will be, with one of the seven vaccines Canada has signed deals to secure.

Now, the prime minister has said that’s a conservative estimate. Asked if the timeline could speed up as was this month—seeing first vaccines in arms in December rather than January—Trudeau said it could happen, but warned that there’s also potential for delays.

“Certainly it’s possible. I mean, that’s one of the reasons why we set out to set up the best range of vaccines we possibly could, and secure way more doses than Canada would technically need because we knew that some vaccines would be faster, some vaccines might be more effective or less effective than others,” Trudeau said in a year-end interview with CTV News’ Evan Solomon, airing in full on CTV’s Question Period this Sunday at 11 a.m. EST.

“Things could happen quicker, things could also happen slower if there are less efficient vaccines, or production challenges in the companies that are delivering them,” he said.

Canada has signed contracts guaranteeing access to 214 million doses of potential COVID-19 vaccines with the option to purchase 200 million more, meaning if all trials pan out, we’d have access to 414 million doses.

The nation-wide immunization plan as it stands, focuses on vaccinating priority groups like seniors and health-care workers between December and March 2021. This would result in having three million Canadians—or eight per cent of the population—immunized.

Vaccinations on the general public would begin in April. Between then and June, 15 and 19 million Canadians will be immunized, which equates to between 40 and 50 per cent of the population. Lastly, likely the lowest-risk demographics as well as anyone else who opted to wait, would be able to receive their shots, meaning that between September and December all 38 million Canadians will be able to be vaccinated, if they wish to be. The government has stated that it won’t be mandatory to receive a COVID-19 vaccine.

Already this month, up to 249,000 Pfizer-BioNTech doses are being delivered, and potentially up to 168,000 Moderna doses could arrive if that vaccine candidate is deemed safe by Health Canada.

Trudeau said his government is being cautious in its estimates, but noted that six months ago not many people thought a vaccine would be discovered, produced, and approved as quickly as COVID-19 vaccine candidates have been.

“What scientists and researchers have been able to do to give us not just hope, but the knowledge that this pandemic will be over, that yes we’ve still got a tough winter to go through, but the end is in sight and we just have to hold on and we’ll get through it, is a huge thing,” said the prime minister.