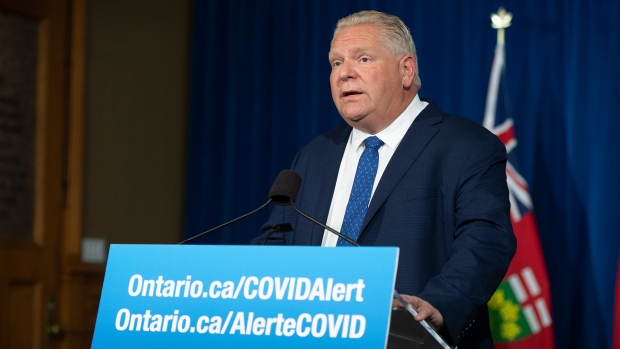 TORONTO — The Ontario government has announced that parents of secondary school students will be able to apply for a one-time $200 payment per child to help offset education costs during the second wave of the pandemic.

Premier Doug Ford made the announcement on Tuesday, saying that parents of secondary students can apply for the payment between Jan. 11 to Feb. 8.

Secondary school parents who want to apply for the payment will be able to on the government’s Support for Learner’s website starting in January.

The government said the money will be deposited directly into parents’ bank accounts approximately two weeks after their application is approved.

The payment will be available to parents of students aged 13 through until Grade 12.

The deadline for parents of elementary school students to apply for the second $200 payment has been extended until Feb. 8, the government said.

The support is available regardless of whether students attend a public school, private school or are homeschooled.

“This money can be used to purchase laptops, workbooks, or any other learning supplies they might need at home,” Ford said at Queen’s Park on Tuesday.

The Ontario government announced on Monday that schools in the province will remain closed to in-person learning until at least Jan. 11. Secondary schools students in southern Ontario won’t be allowed to return to the classroom until Jan. 25.

The Ontario government also announced Monday that they will reduce electricity to a discounted off-peak rate of 8.5 cents per kilowatt-hour for all time-of-use and tiered customers.

The rate will be available for a 28-day period and will be applied to bills automatically, the government said.

“We know people need that extra help,” Ford said. “Customers won’t have to fill out an application to receive this rate, it’s just going to show up on your bill.”