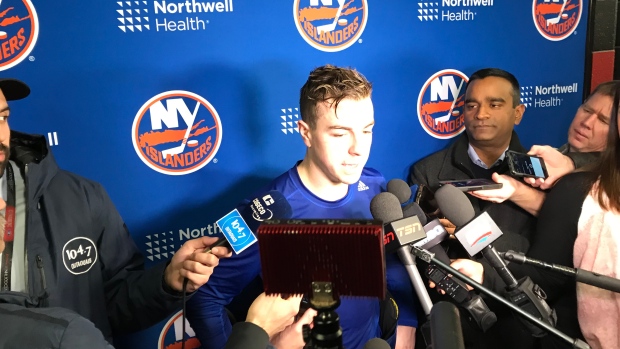 OTTAWA — J.G. Pageau is back in Ottawa, but he’s not a Senator anymore.

Pageau was traded to the New York Islanders on Feb. 24, the NHL’s trade deadline day, after having spent eight seasons with the Sens.

He signed a six-year contract extension with the Islanders that same day.

But it wouldn’t take long for Pageau to return to the Canadian Tire Centre. Suiting up for the Islanders, Pageau made his return to Ottawa Thursday, to face his former team.

“It feels a little weird just to be on the other side,” Pageau said. “A little nervous, but good nerves. It wouldn’t be normal if I wasn’t. I’m happy with the new team, but I’m also grateful for everything that I lived here in Ottawa.”

Pageau said, off the ice, he and his former teammates are still friends.

“On the ice tonight, it might be a different story.”

“I sat right next to him in the room for years and he’s one of my closest friends,” Ryan said. “It’ll be different for me. I’m sure we’ll have a laugh about it after the game.”

Ryan says he expects the fans to be loud for Pageau’s return.

“But when the puck drops, like when Alfie came back, there’s kind of a warm reception and then they root against a player.”

Senators Head Coach D.J. Smith said Pageau will be given a warm welcome back to the Canadian Tire Centre.

“We’ll give him a good reception” Smith said. “He really did a lot of good things for this organization.”

The Senators have a video tribute for Pageau planned for Thursday night’s game.

The Senators face the Islanders at 7:30 p.m. at the Canadian Tire Centre. The game can be seen on TSN5 and heard on TSN 1200 radio.

With a report by CTV’s Dylan Dyson.