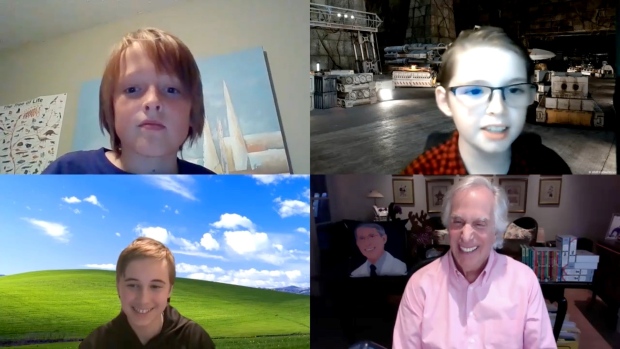 OTTAWA — While many 12-year-olds are staying busy playing video games, three Ottawa boys have watched their podcast grow in popularity.

“The Interview Dudes” are Jack, Nathan and Ben. The three boys in Grade 7 host an audio podcast that has attracted some big names since its start nearly a year and a half ago.

Ryan Reynolds, Steve Martin, Jim Gaffigan, and even the Fonz himself, Henry Winkler, are some of the celebrities they’ve interviewed.

It all started as a fun project in the summer of 2019, when the boys were 11. Jack says his dad thought of the idea while on a drive to Toronto.

“I got inspired so I recruited Nathan and he drew some logos and then we recruited Ben, and then we started doing some interviews and now we’re here,” Jack says.

“Here” is currently recording the podcasts over Zoom, while each of the three are in their respective homes. Nathan recalls how a weeks’ notice to interview Ryan Reynolds turned into just two hours because of the star actor’s availability.

“I was kind of nervous at first, but when we started going it was fine.”

Ben thinks that interviewing Reynolds opened up opportunities for the trio.

The boys do have a bit of help putting the show together from James Charron, the podcast’s producer and Jack’s dad.

“To be truthful, I’m so proud of these three kids, and how they’ve come so far in the last year and half, talking to people that I, personally, would not have talked to when I was a kid,” Charron says.

They’re able to line up interviews thanks to the power of social media.

“We mostly get people from asking them on Twitter,” says Jack. “We say stuff like, ‘Hi Ryan Reynolds, we’re three 11-year-olds, now 12-year-old podcasters, and we’d love to interview you.’”

It all comes together not just because of hard work, says Jack.

“It’s like, half luck, half determination,” Nathan says, “It’s probably a lot of luck.”

It’s hard for them to pick a favourite interview, but some guests do have their perks, says Nathan.

“Aside from Ryan Reynolds and Jim Gaffigan, those famous ones, probably the Redblacks because we got a bonus tour of the stadium,” he says.

While balancing schoolwork, the conversations continue.