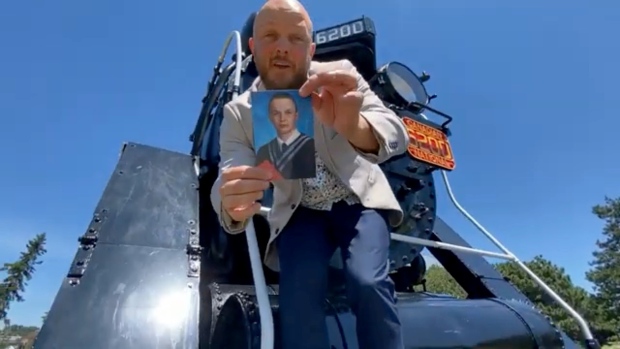 OTTAWA — An Ottawa teacher has put a cap on a school year like no other after two of his students helped him parody a song from the musical “Hamilton” for their virtual talent show.

Hamilton is one of the most famous musicals on Broadway, and now John Henry MacDonald, a math teacher at St. Mother Teresa High School in Barrhaven, is becoming famous in his own right.

“The atmosphere in that classroom is very much ‘sense of humour,’” says MacDonald. “The kids are really good with teasing me. And I like to take a joke once in a while just to lighten the mood.”

MacDonald wanted to end the school year on a high note, and his video parody of the song “You’ll Be Back” did just that.

“Making something together, when we were actually all apart, helped us laugh the tough times off and get through these last two months of virtual (learning) that were pretty slow and hard to get through at times,” says MacDonald. “When we went virtual at the end of the year, I thought it would be funny if we redid one of the songs. And literally the next day they came back with lyrics.”

MacDonald’s Grade 7 students Olivia and Faith say they’re obsessed with “Hamilton” and this was the perfect opportunity for them to put their own lyrics to paper and screen.

“We just instantly started writing,” says Olivia. “It just consisted of Faith and I on FaceTime and just brainstorming ideas. And if an idea pops into our heads we just write it down and make sure the words rhyme and everything.”

Faith adds, “We’d kind of just think of a funny lyric to do and just kind of think of something that rhymes with that so the song would just kind of flow.”

The whole process took about two weeks to complete with the help of MacDonald’s wife who shot and edited the video.

For the students, this was the perfect way to remember a school year like no other.

“I think I just really enjoyed talking to Olivia and deciding the lyrics and coming up with funny lines and making jokes about it,” says Faith.

“It gave us something to do to distract us from everything else that is happening,” says Olivia.

And this experience is also something that MacDonald won’t soon forget either.

“I feel like it helped them get though a tough year, with a little sense of humour.”