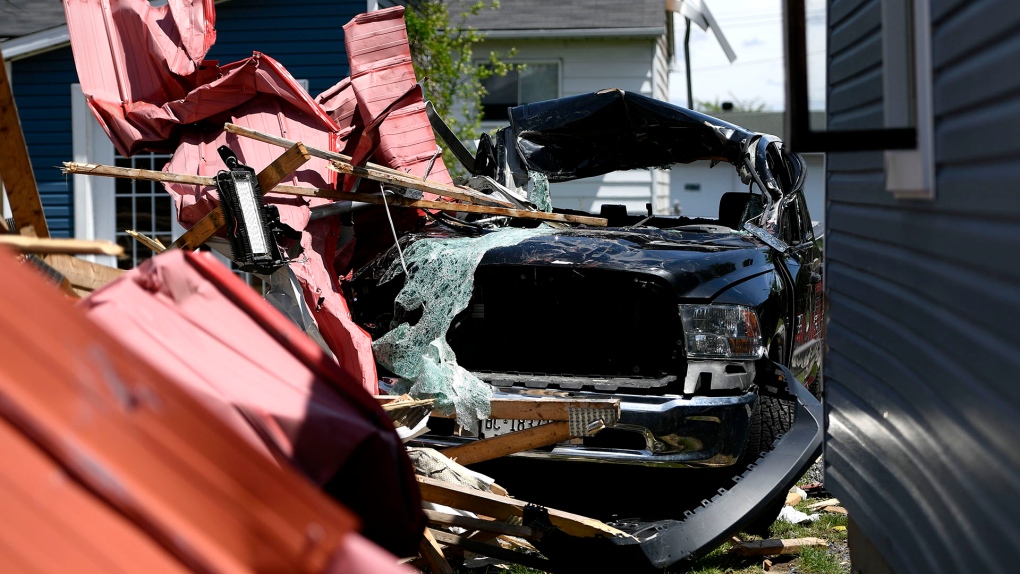 Winds in the destructive storm that hit Ottawa and the region on Saturday reached 190 kilometres per hour in some areas, researchers say, but a tornado did not touch down.

“Analysis of the data reveals that a particularly intense downburst, not a tornado, was responsible for the damage” in south Ottawa, the Northern Tornadoes Project at Western University said on Twitter Wednesday morning.

Maximum wind speeds reached 190 kilometres per hour, the researchers said. They measured the storm, known as a ‘derecho,’ as as EF-2. The EF-scale measures the intensity of wind damage on a scale from 0 to 5.

“Some of those larger pole lines that you see on Woodroffe, on Merivale, we’re hitting those hard today,” Joseph Muglia, Hydro Ottawa’s director of system operations, told CTV Morning Live. “Once we can get those pole lines back up, we’ll see large numbers of customers brought on at once.”

Muglia said additional hydro crews are arriving from Toronto on Wednesday to help.

“We’re still aiming for the end of this week to have the bulk of the customers online and back with power,” he said. “That’s still the trajectory and that’s what we’re aiming for.”

Hydro One was reporting more than 29,000 customers in eastern Ontario still without power Wednesday morning, down from 49,000 Tuesday afternoon. Hydro Quebec said there were still 15,500 customers in the Outaouais region to be connected, down from 21,000 on Tuesday.

An NTP storm survey team investigated damage in southern Ottawa following the May 21 derecho. Analysis of the data reveals that a particularly intense downburst, not a tornado, was responsible for the damage there, with maximum wind speeds reaching 190 km/h (EF2). #ONStorm 1/2 pic.twitter.com/qCfR4XaPn5

About 40 roads are still impassable due to downed trees and hydro lines, Public Works General Manager Alain Gonthier told reporters Tuesday afternoon. Residents are still being asked to stay off the roads if they can.

Some city respite centres are open from 10 a.m. to 10 p.m. again Wednesday for people who need electricity, water, food and shelter. You can see a full list here. There are also disposal bins set up at several locations for spoiled food, and the city is conducting a green bin blitz to collect food waste.

Many city services were closed on Tuesday but reopened on Wednesday.

English public and Catholic schools in Ottawa that have power are reopening Wednesday. There are more than 60 schools in the city that still don’t have power and they will remain closed.

Two schools were damaged by the storm and will be closed for an extended period of time. French boards plan to open schools that have power.

At least 10 people across Ontario and Quebec were killed in the storm, including three in the Ottawa area.