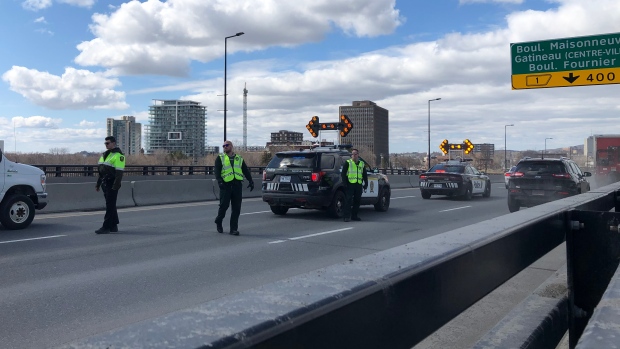 OTTAWA — Motorists, cyclists and pedestrians will be greeted by police checkpoints at all interprovincial crossings into Ottawa on Monday, as part of new COVID-19 restrictions announced by the Ontario government.

Ottawa police say starting at 12:01 a.m. Monday, officers will be screening travellers at all Ottawa-area interprovincial border crossings from Quebec.

The Ontario government announced the new travel restrictions into Ontario from the provinces of Manitoba and Quebec on Friday afternoon as part of new restrictions aimed at reducing the spread of COVID-19.

Ottawa police officers will be stationed 24 hours a day, seven days a week on the Ontario side of the Champlain Bridge, Portage Bridge, Chaudiere Bridge and Macdonald-Cartier Bridge, as well as the Quyon and the Bourbonnais ferries.

Police say officers will also have a presence at the Alexandra Bridge, “as the Provincial Order also applies to pedestrians and cyclists.”

Officers will be wearing personal protective equipment including masks and eye wear. Police ask members of the public to wear a mask when interacting with officers.

In a statement Sunday afternoon, police said according to the new provincial powers, when approaching Ontario, a person may be stopped by police officers who may ask questions as to their purpose for entering the province.

“In the initial 24-72 hours of this operation, officers will focus on education and awareness,” police said.

Ottawa police says travel into Ottawa from Quebec is restricted, except for the following purposes

Police say if the officer “reasonably believes that the person is not complying with the Provincial Order and is not entering Ontario for one of the permitted purposes, “the officer can direct them to return to Quebec.”

OC Transpo says transit vehicles will be permitted to pass through the police checkpoints set up at the Ottawa-Gatineau boundary.

“We don’t expect significant service impacts as a result, save for minor delays at the bridges,” said OC Transpo on Twitter.

The STO says its buses will be able to cross the bridges once the police checkpoints are set up.

An STO spokesperson tells CTV News Ottawa that police could enter the buses to validate the nature of the trips for passengers, and police may ask customers to get off the bus if the trip is not justified.

The STO is anticipating bus delays for entry into Ottawa.

The Quyon Ferry will continue to run between Ontario and Quebec.

In a statement on its website, the Quyon Ferry said, “The ferry will remain open even after the new rules come into place on Monday.

“From the announcement (Friday): Travellers who are coming into Ontario for work, medical care, transportation of goods and exercising Indigenous Treaty rights will be exempted.”